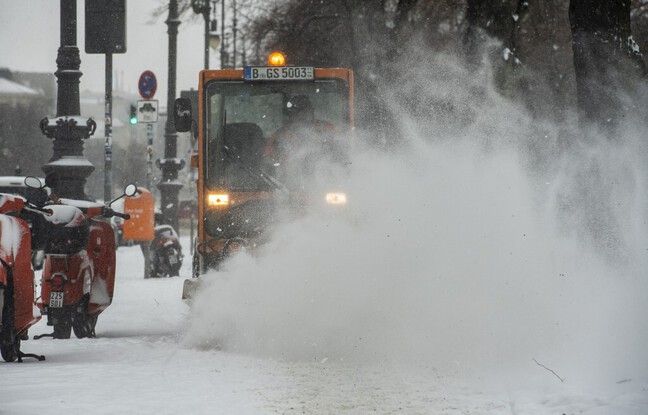 Motorists trapped on the highway, vaccination centers closed, trains canceled: the snow paralyzed part of Germany on Tuesday, where at least one person died, and the United Kingdom.

In Germany, dozens of motorists and truck drivers were stranded overnight for around 30 kilometers on the A2 motorway near Bielefeld (North Rhine-Westphalia) due to the bad weather. Several trucks overturned, causing the highway to close in both directions.

Drivers stranded for nearly 16 hours in their cars

Most of them spent almost 16 hours in their vehicles in freezing cold. Rescuers provided them with blankets and hot drinks. Video footage shows shivering drivers huddled in their vehicles, complaining of having gone hours without food as the temperature plummeted to minus 12 degrees.

Thousands of drivers are in freezing temperatures on the # A2 at #Bielefeld captured. Some of them told our reporters that there had been no progress for more than ten hours. According to the police, there is no end in sight to the full lockdown. There remains a total of almost 70km of traffic jam. pic.twitter.com/CDVjeYAVmc

“The general situation is difficult,” a spokesperson for the Bielefeld police force told reporters. “It will take a long time for the traffic jam to subside,” said a spokesperson for the region’s motorway control center. Motorists were also stranded for part of the night in central Germany on the A4 motorway. Transport Minister Andreas Scheuer called on residents of northern and central Germany to refrain from driving at least until Wednesday.

The 48-hour snowfall and the formation of snow drifts have also resulted in delays and cancellations on the rail network, according to Deutsche Bahn. Several long-distance lines are affected throughout Germany.

After further falls expected in the north on Tuesday and Wednesday, this precipitation should then decrease in intensity. However, the cold is expected to remain intense this week, with temperatures close to -20 ° C at night in some areas.

Several localities, including Frankfurt (center), have increased their reception and care capacities for the homeless. In Nuremberg (Bavaria, south), part of the population is deprived of heating due to a fire in a power station.

These bad weather caused at least one death in Germany. A 69-year-old man was found dead on Tuesday near his tractor in the Saxony-Anhalt region. He would have frozen to death, according to local police. On Monday, a man was found dead in the snow, in Bielefeld, without his death being at this stage related to bad weather.

The situation also difficult in the United Kingdom

Snow fell in abundance on other European countries, from Belgium to Denmark to central Europe.

The situation is particularly difficult in much of the United Kingdom, from the south of England to Scotland in the north, passing through parts of Northern Ireland. These regions were placed on yellow alert on Tuesday due to snowfall likely to disrupt travel by road or rail, according to the British meteorological service (Met Office). The latter also warns against the risk of falling due to ice.

In London, snow has been falling continuously since Tuesday morning, covering the parks with a thin white layer, on which children have fun sledding. In the north and east, snowfall could reach up to 15 centimeters.

Snow can fall here too – London in snow. Have a nice evening. pic.twitter.com/wSnxMxlmuG

Several coronavirus vaccination centers have had to close, in Ipswich and Colchester in particular, while the country, currently confined, continues its campaign at a forced march with the objective of being able to gradually relax the restrictions.

Several schools, which are currently only open for vulnerable children or those of essential workers, have also had to keep doors closed in south-east England and Lincolnshire (east).