Some 1,000 rescuers mobilized to find survivors after a huge mudslide 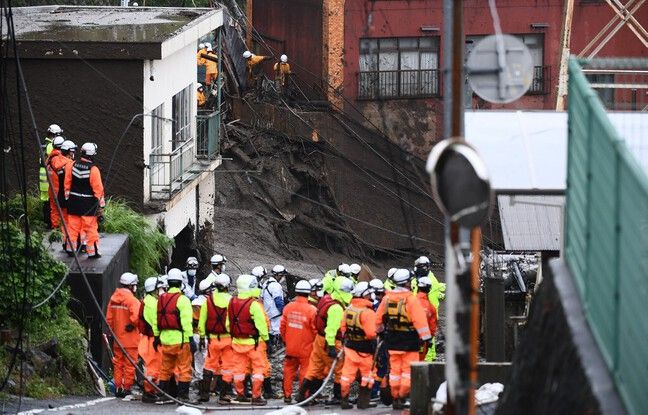 Japanese rescuers were on Sunday looking for possible survivors in the coastal town of Atami, the scene of a huge mudslide, climbing on cracked roofs and searching cars projected on buildings. The death of two women has been confirmed after the landslide that brought mourning to the spa of Atami (central Japan) on Saturday. At least 19 people have been rescued and around 20 others are still missing, said Yuta Hara, spokesperson for the disaster management center in Atami.

He estimated that some 130 houses and buildings had been damaged in Atami where clearing machines were at work on Sunday. Search operations were carried out intermittently due to bad weather. Torrents of mud swept through part of the town on Saturday morning after days of heavy rains, sweeping through hillside houses and turning residential areas into quagmires.

The rain will keep on falling

On Sunday, dark water flowed past half-buried vehicles and destroyed buildings, literally torn from their foundations. An air conditioner hung from a devastated house, now perched on a pile of mud and debris. “We resumed the rescue operations early this morning with some 1,000 rescuers, including 140 soldiers,” said a departmental official, adding: “We are doing our best to search for survivors, while conducting the operation with caution because the rain continues to fall. “

Rainfall is expected to continue for several days over part of Japan, the weather agency said, warning of flooding and landslides. The locality of Atami, located about 90 km southwest of Tokyo, received 313 mm of rain on Friday and Saturday in 48 hours, while it averages 242 mm for the whole month each year. of July, according to the public broadcaster NHK.

Much of Japan is currently in the midst of the rainy season, which often causes flooding and landslides, prompting local authorities to issue evacuation orders. Scientists say the phenomenon is exacerbated by climate change as a warmer atmosphere holds more water, increasing the risk and intensity of extreme precipitation. In 2018, floods in western Japan killed more than 200 people.

About 2,800 homes were without power in Atami, where survivors were moved to shelters. In a gymnasium, mattresses were placed on the floor and anti-Covid security measures were in force: the victims wore masks and were placed at a good distance from each other. A total of 387 people were evacuated in Atami, according to spokesman Yuta Hara.