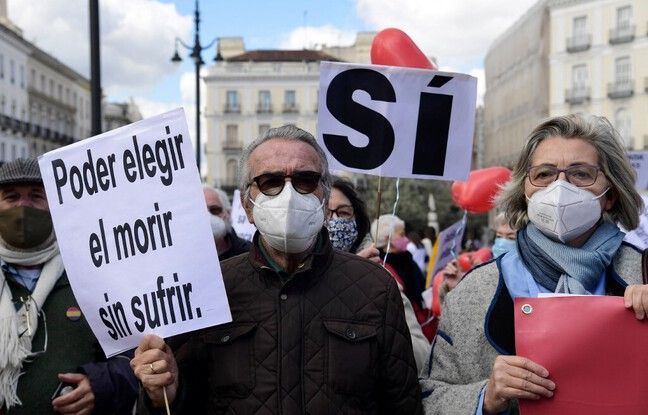 Long applause greeted this vote. The Spanish parliament definitively approved the legalization of euthanasia on Thursday, making Spain one of the few countries in the world allowing a patient with an incurable disease to die to end his suffering.

This law, which is due to come into force in June, was adopted, thanks in particular to the votes of the left and the center, by a large majority of 202 deputies out of 350, 141 right-wing and far-right deputies voted against, while only 2 abstained.

Socialist Prime Minister Pedro Sanchez, who had made this law a priority, welcomed it, describing Spain in a tweet as “a more humane, fairer and freer country”. “Thanks to all the people who fought tirelessly for the right to die with dignity to be recognized in Spain”, this law “is finally becoming a reality”, he added.

Spain thus becomes the fourth European country to decriminalize euthanasia, after the Netherlands, Belgium and Luxembourg. The Portuguese parliament also voted at the end of January a law legalizing euthanasia, but the Constitutional Court on Monday rejected the text, which will be referred to the deputies.

Spanish law authorizes both euthanasia – that is to say when the caregiver causes the death of the patient – and medically assisted suicide – when the patient himself takes the prescribed dose of product to kill himself. It provides that anyone with “a serious and incurable disease” or “chronic pain placing him in a situation of incapacity” can request the help of the medical profession to die and thus avoid “intolerable suffering”.

However, strict conditions frame the process: the person, Spanish or resident in the country, must therefore be “capable and aware” when making the request, which must be formulated in writing “without external pressure” and renewed fifteen days later. . The doctor will always be able to reject this request if he considers that these criteria are not met or to assert “his conscientious objection”. In addition, it must be approved by another doctor and receive the green light from an evaluation committee.

The adoption of this law comes after several emblematic cases in the country in recent decades, including that of Ramón Sampedro, a quadriplegic man played on screen by Javier Bardem in the Oscar-winning film “Mar adentro”.

It is a victory “for the people who will be able to benefit from it”, and also “for Ramón”, congratulated to AFP Ramona Maneiro, the friend of Ramón Sampedro who helped him to die in 1998. Winds up against this reform, the Spanish Catholic Church compared euthanasia to “a form of homicide” while the far-right party Vox announced that it would file an appeal before the Constitutional Court.