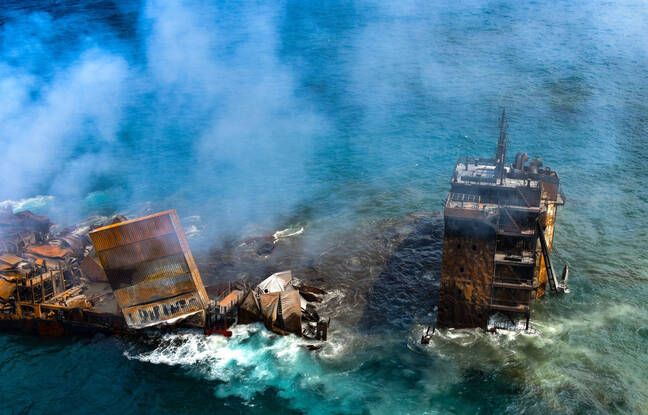 Sri Lanka is preparing to face an oil spill that could be caused by the sinking of the container ship MV X-Press Pearl. “We have asked for help from India” in order to protect its coasts, an official said on Thursday. The country is currently trying to contain as much as possible an ecological disaster already underway. Everything could get worse with this possible oil spill.

The Indian Coast Guard has already participated in operations to extinguish the fire that broke out aboard the container ship on May 20 and one of their ships with specialized equipment was already at the outpost to contain possible oil pollution before it reaches the coast. Oil dispersants, booms and surface skimmers are ready for immediate use at the slightest sign of a leak from the MV X-Press Pearl which began to sink on Wednesday off the island’s west coast, the people said. authorities.

A large quantity of lubricants and 25 tons of nitric acid

Navy spokesperson Indika de Silva said there was no visible sign of the 350 tonnes of fuel in the vessel leaking. However, the risk of an oil and toxic spill remains high given the ship’s shipping manifesto revealing that it was carrying a large quantity of lubricants in addition to the “dangerous cargo” of 81 containers, including 25 tonnes of nitric acid. .

Tons of plastic granules, intended for the packaging industry, coming from the cargo of the boat, have already covered 80 kilometers of the coast of the west of the island, which thus suffers the most serious ecological disaster of its history.

The boat is slowly sinking

The owners of the sinking vessel, X-Press Feeders, said it was slowly sinking after the failed attempt to tow it off the Sri Lankan coast on Wednesday. “X-Press Feeders (…) can confirm that the aft part of the vessel is resting on the seabed at a depth of about 21 meters, and that the front part is slowly sinking,” the company said in a statement Thursday morning. .

The Sri Lankan Navy said the bow of the ship was still above the waterline. “Even if the bow touches the bottom of the sea, there will always be a part of the upper deck and the deck that will come out of the water,” said Indika de Silva on Thursday, knowing that the 31,600-ton vessel is 186 m in height. long over 45 m high.

Sri Lankan President Gotabaya Rajapaksa on Monday asked Australia to help his country assess the ecological damage, as the island is home to one of the richest biodiversity in South Asia. The ecological damage is being assessed, according to the president of the Marine Environment Protection Authority, Dharshani Lahandapura. She claimed it was the worst she had ever seen in this country.

The head of the Catholic Church of Sri Lanka, Cardinal Malcolm Ranjith, lamented on Wednesday that thousands of fishermen find themselves deprived of their livelihood because of this plastic pollution. The prelate also called for the authorities to be brought to justice for allowing the ship to sail in Sri Lankan waters. According to the clergy, the majority of the victims of this pollution belong to the Catholic community, which is a minority on the island.

Sri Lanka has launched a criminal investigation into the fire and pollution. Authorities believe the fire was caused by a nitric acid leak, noticed by the crew as early as May 11, long before the ship entered Sri Lankan waters.

The three main crew members, including the captain and chief engineer, both of Russian nationality, will have to remain on the island for the duration of the investigation, police said. Their passports were confiscated on Tuesday by order of a court. After Sri Lanka, the ship was to sail to Malaysia and then Singapore, where it is registered.