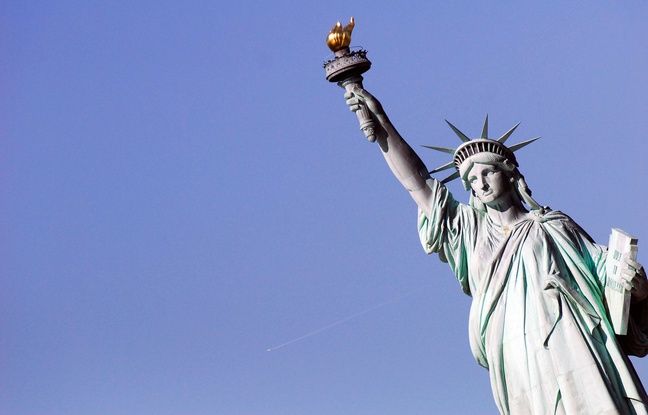 A reduced model of the Statue of Liberty preserved at the Musée des Arts et Métiers in Paris began this Monday the journey that will take him to the residence of the French ambassador to the United States on July 14. The bronze statue of 2.83 m is lent for ten years to the French embassy by the CNAM (National Conservatory of Arts and Crafts). It was installed in 2011 on the courtyard of the Museum of Arts and Crafts.

“We are part of a hymn to freedom and a recognition of Franco-American friendship,” said the general administrator of the CNAM, Olivier Faron, during a ceremony to mark the departure of the statue. The work was produced by the Fonderie d’Art Susse-Fondeur from a 3D digitization of the plaster model of 1878 used by the sculptor Auguste Bartholdi to build “La Liberté enlightening the world”, his “big sister” offered. by France to the United States in 1886 for the commemoration of the centenary of Independence and has since become one of the symbols of the country.

She will soon be leaving from Le Havre

“The statue is placed in a sarcophagus, itself strapped in a container equipped with a box to geolocate it, ensure the doors are closed and control the temperature”, explained Damien Denizot, deputy director of communication at French shipowner CMA-CGM, which finances the transport from Paris to Washington. She will leave Le Havre, between June 19 and 21, aboard the Tosca.

It will make a first stopover in New York to be exhibited on Ellis Island, not far from Liberty Island where its big sister sits, for the American National Day, July 4. The trip will end with the unveiling of the statue in the garden of the residence of the French Ambassador to the United States in Washington on July 14, France’s National Day.