Still thousands of demonstrators in the streets, despite fatal raids 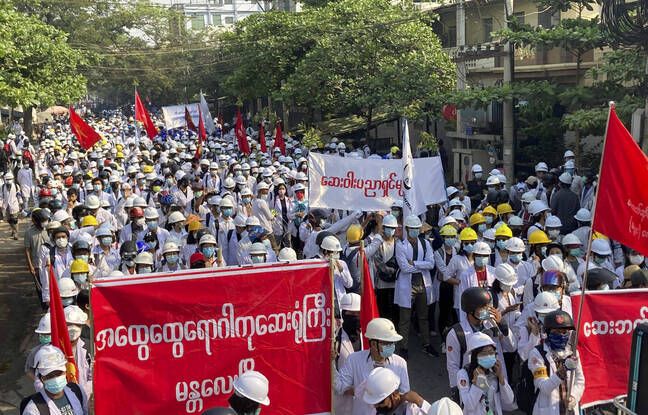 The crackdown continues this Sunday in Burma against pro-democracy demonstrators who took to the streets in their thousands despite the raids the day before, in which members of Aung San Suu Kyi’s party were arrested and beaten to death. In Bagan (center), famous for its century-old pagodas, detonations were heard. “An 18-year-old boy was shot in the jaw,” according to rescuers, while local media reported “at least five people injured.”

Raids took place last night in the economic capital Yangon targeting officials of the National League for Democracy (LND), Aung San Suu Kyi’s party ousted on February 1. “We do not know how many people were arrested,” said Soe Win, member of the movement. A local LND official, Khin Maung Latt, 58, was killed. “He was beaten and then taken out of his home. He apparently did not survive the harsh interrogation he endured, ”lamented Tun Kyi, a former political prisoner.

Thousands of Burmese protested again, responding to the call for massive mobilization launched by protest leaders. These strike calls are having a significant impact on many sectors of the already fragile Burmese economy, with banks unable to function, hospitals closed and ministerial offices empty. Fear is on everyone’s mind: more than 50 people have been killed since the start of the peaceful uprising against the coup. Widely circulated footage showed security forces firing live ammunition at rallies and removing the lifeless bodies of protesters.

On Saturday, security forces continued to fire live ammunition, according to the Association for Assistance to Political Prisoners (AAPP). The state media deny any involvement of the police and the army in the deaths of demonstrators. Faced with the deteriorating situation, some Burmese are fleeing the country. About fifty, including eight police officers who refused to take part in the repression, reached neighboring India. Burma demanded from India the repatriation of the eight police officers “in order to preserve good relations between the two countries” in a letter. A hundred Burmese are still massed at the border in the hope of being allowed to enter the country.

The generals are turning a deaf ear to the concert of protests of the international community, divided on the response to be provided. The UN Security Council failed to agree on a joint statement on Friday. Coercive measures have been announced by the United States and the European Union, but observers urge to go further with an international embargo on arms deliveries, a decision which requires the agreement of all members of the Council. However, Beijing and Moscow, traditional allies of the Burmese army and arms exporters in the country, consider this crisis to be an internal affair in the country.