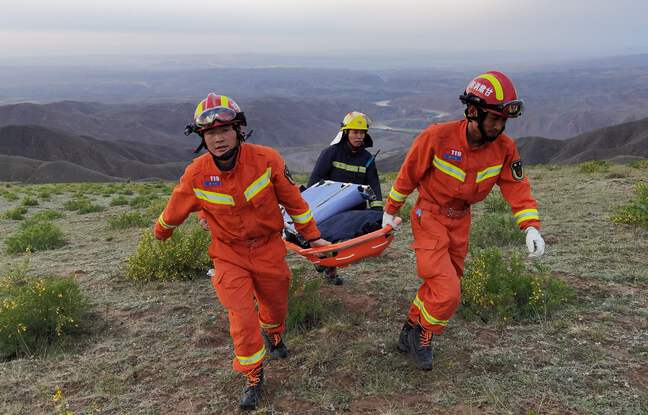 For athletes, the race on Saturday in Gansu province, in northwestern China, had everything to dream of. The 100 km of its route ran through the stone forest of the Yellow River, famous for its rugged mountainous landscapes marked by stalagmites and stone pillars. But it is in fact with horror that the participants had an appointment. Twenty-one people died among the runners as a result of sudden severe weather conditions.

All the other competitors are safe and sound, since “at 3 o’clock in the morning on Sunday, 151 participants [étaient] safe ”, according to the official agency New china. A total of 172 people took part in the race taking place near Baiyin town. “This implies that this incident killed 21 people in total,” for its part announced the television channel CCTV. Eight participants are also treated in hospital for minor injuries, said the mayor of Baiyin, Zhang Xuchen.

The drama from kilometer 20

“Around noon, the high altitude stretch of the 20 to 31 kilometer race was suddenly affected by dire weather conditions. In no time, hailstones and freezing rain suddenly fell in this area, and there were strong winds. The temperature has dropped sharply, ”said the mayor. Shortly after receiving calls for help from some participants, the marathon organizers dispatched a rescue team that managed to save 18 participants, according to the city councilor.

At around 2 p.m., weather conditions worsened and the race was canceled, as local authorities sent more aid to the scene. “This incident is a public security incident caused by sudden changes in the weather in a local area,” Zhang Xuchen said, adding that provincial authorities would further investigate its cause.

In total, more than 700 rescuers were mobilized to search for the missing. Local media footage showed rescue workers in fatigues with headlamps scaling the rocky terrain at night. Ultra-long runners were filmed wrapped in emergency blankets. Temperatures dropped again overnight, making it more difficult to rescue and search, according to New china.

Deadly floods and landslides have hit Gansu in the past, with landslides reportedly killing more than 1,000 people in one town in 2010. The province is also prone to earthquakes.