Suez Canal: “Weeks” or 48 hours? Uncertainty about the time needed to unlock Ever Given 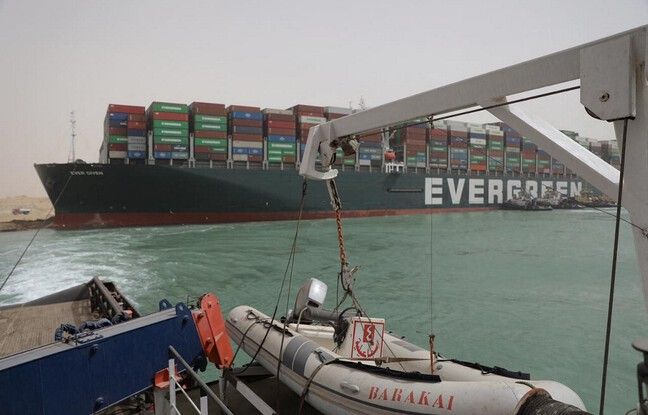 Will it take a few days or a few weeks to unblock the Suez Canal? Efforts continue this Friday to free a 400-meter-long container ship stuck for four days across this crucial route for global shipping.

The incident, which occurred on Tuesday and reported by netizens overnight from Tuesday to Wednesday, resulted in massive traffic jams, with dozens of ships stranded at both ends and in the waiting area in the middle of the canal, and significant delays in deliveries of petroleum and other products. Since Wednesday, the Egyptian Suez Canal Authority (SCA) has been trying to free the giant vessel weighing more than 220,000 tons.

“Tugs and dredges are used to break rocks” and try to free the ship, an official of the Japanese company Shoei Kisen Kaisha, owner of the boat, told AFP. According to the SCA, between 15,000 and 20,000 cubic meters of sand would have to be removed to reach a depth of 12 to 16 meters and get the ship afloat. Mohab Mamish, adviser to Egyptian President Abdel Fattah al-Sisi on port matters, told AFP on Thursday evening that navigation would resume “in 48 to 72 hours maximum”.

“I have experience of several such rescue operations and, as the former chairman of the Suez Canal Authority, I know every inch of the canal,” added Mohab Mamish, who oversaw the recent expansion of this seaway which sees pass, according to experts, nearly 10% of international maritime trade.

But, a few hours earlier, the Dutch company Smit Salvage had warned that the operation could take “days, even weeks”. The operator of the Evergreen Marine Corp, based in Taiwan, asked Smit Salvage and the Japanese company Nippon Salvage to put in place “a more effective plan” to rescue the ship. The first experts arrived on Thursday. The shipping giant Maersk and the German Hapag-Lloyd said Thursday that they were planning to divert their ships and go through the Cape of Good Hope, a detour of several thousand kilometers around the African continent.