Teenage girls kidnapped from boarding school have been released 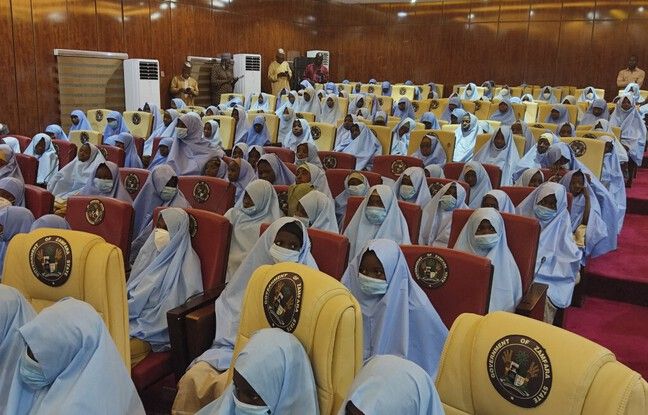 Kidnapped last Friday from their boarding school in Jangebe in northwestern Nigeria, the hundreds of teenage girls were released and are in Zamfara government premises on Tuesday morning, state governor Dr. Bello announced. Matawalle.

“I am happy to report that the girls have been released. They have just arrived in the government house, and are in good health, ”he told a reporter, who was able to see the young girls. “The total number of girls abducted from the school is 279, they are all here with us, we thank Allah,” added the governor.

The authorities had initially claimed that 317 young girls were missing after the attack on this boarding school in Zamfara state on the night of Thursday to Friday by armed men. The features of the faces drawn by fatigue, the young girls arrived very early Tuesday morning at the government house in Gusau (capital of Zamfara) in several mini-buses, noted a journalist.

The authorities gathered them in an auditorium where clean clothes, a sky blue hijab, were distributed to them. Under the lenses of the journalists, the teenage girls then stood up to the music of the Nigerian national anthem. It was the fourth mass kidnapping of schoolchildren in less than three months in northwestern Nigeria, where criminal groups known as “bandits” are escalating large-scale cattle raids and kidnapping for ransom. During kidnappings, the “bandits” target public figures or travelers on highways.

But in recent months, schools appear to have become a lucrative target for these criminal gangs. Zamfara authorities are used to discussing amnesty agreements with the criminal groups with whom they have been negotiating for over a year in exchange for handing over their weapons. It was the officials of the state of Zamfara who had also negotiated the release last December of 344 boys, kidnapped by bandits in their boarding school in the neighboring state of Katsina.

With each release, the authorities deny paying any ransom to the kidnappers, but this is however little doubt for the security experts who fear that this will lead to an increase in kidnappings in these regions plagued by extreme poverty and little or no at all secure. This new mass kidnapping had revived the memory of the kidnapping of Chibok in 2014, when the jihadist group Boko Haram kidnapped 276 high school girls in another region of the country (northeast), arousing worldwide emotion. More than a hundred of them are still missing and no one knows how many are still alive.

But these two kidnappings are to be distinguished: the “bandits” act above all for the lure of profit, and not for ideological reasons, even if some have forged links with jihadist groups in the northeast. After this new mass kidnapping on Friday, President Muhammadu Buhari, much maligned in the face of the catastrophic security situation in northern Nigeria, where he is from, assured that he would not “give in to the blackmail” of the “bandits” . Their number is uncertain, but these armed groups are attracting more and more unemployed young people from these regions where more than 80% of the inhabitants live in extreme poverty.

Some of these groups have hundreds of fighters, others only a few dozen.This criminal violence has killed more than 8,000 people since 2011 and forced more than 200,000 people to flee their homes, according to a report by the International Crisis Group think tank ( ICG) published in May 2020. The other worry is that the increase in these kidnappings will not further worsen the dropout rate, particularly of girls, in this region which already has the largest number of children not going to school in Nigeria, according to the ICG.