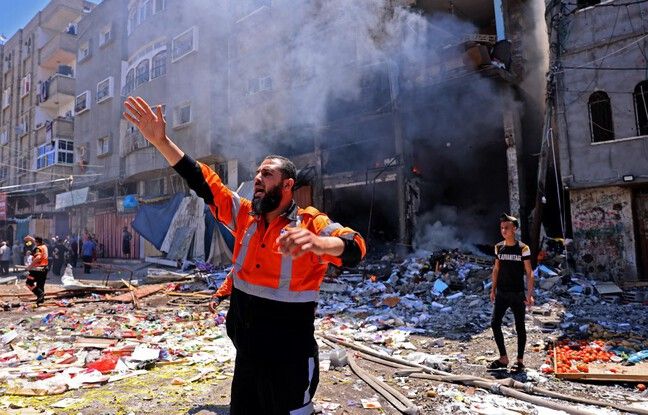 Ten members of a Palestinian family including eight children were killed this Saturday morning in an Israeli airstrike in Gaza City, Palestinian relief announced. The raid hit the home of the Abu Hattab family, whose mother and four children aged five to 15 were killed in Al Shati refugee camp, paramedical sources said.

Four of their cousins, aged eight to 14, and their mother also died while visiting them on the celebration of Eid al-Fitr, according to this source. The two fathers, Aala Abou Hattab and Mohammad Al Hadidi, then outside the building, survived, like a five month old baby who was hospitalized. “They (the children) were safe in their homes, they did not carry weapons, they did not fire rockets,” Mohammad Al Hadidi testified.

Hamas leader Ismail Haniyeh denounced in a statement “a heinous massacre in the Al-Shati camp”. The Israeli army for its part announced overnight at least five strikes on the entire Gaza Strip. Among the targets, according to an army statement, was one of the headquarters of Taoufik Abou Naim, commander of the Hamas security forces, as well as several “rocket launch sites” in the north and south. of the Hamas enclave and “military intelligence” buildings.

Egypt “exceptionally opened” this Saturday its land border with Gaza, the Rafah crossing, to allow “the entry of ten Egyptian ambulances into the Gaza Strip in order to transport wounded Palestinians (with a view to) treating them in Egypt, ”said an Egyptian medical source on condition of anonymity. The Rafah crossing is the only opening in the Gaza Strip to the world that is not controlled by Israel. The Hebrew state has imposed a blockade on the Palestinian enclave for more than a decade.

“Exceptional” opening of the border

A security official at the border said this decision was “exceptional” because the crossing usually remains closed during public holidays, including the festival of Eid al-Fitr. The state health care authority announced on Friday that three health facilities had “started to prepare” to receive wounded from Gaza.

The last balance sheet of the Palestinian authorities reported Friday evening of 139 dead, including 39 children, and 1,000 injured in the Israeli bombardments on the Gaza Strip since Monday. The Hebrew state has for its part recorded nine dead including a child and a member of the army. More than 2,300 rockets have been launched into Israeli territory since Monday, killing 9 people, including a child and a soldier, and injuring more than 560.

Israel launched these punitive strikes in the face of hundreds of rockets from Hamas, the Islamist movement controlling the Gaza Strip, fired after Israeli police injured hundreds of Palestinians on the Mosque Plaza in East Jerusalem, an area of ​​the city illegally. occupied by the Hebrew state since 1967. These clashes followed several days of clashes in the Holy City, mainly due to threats of expulsion of Palestinians from their homes in East Jerusalem for the benefit of Jewish settlers.