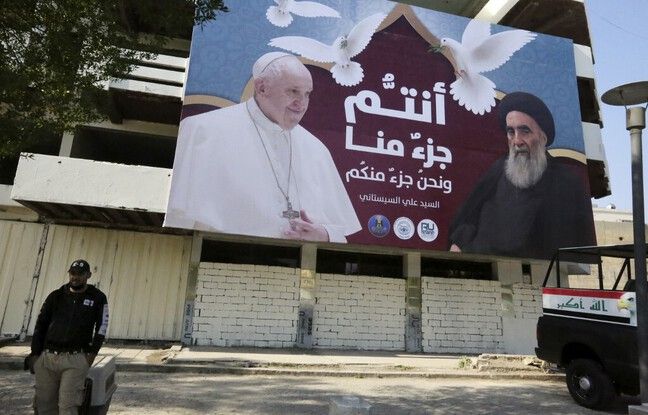 At least ten rockets fell early Wednesday on a base housing US soldiers in western Iraq, two days before Pope Francis’ historic visit to the country. This new attack, already preceded by several with the same modus operandi over the past two weeks, reminds us of how the first visit of a sovereign pontiff to Iraq is a logistical headache.

In addition to the health restrictions taken to try to stem a worrying second wave of Covid-19 in the country, the tensions between the two powers acting in Iraq, Iran and the United States, are an additional obstacle to the success of the papal program. Of the ten rockets fired at the Iraqi air base of Ain al-Assad, several fell inside the section where American soldiers of the international anti-jihadist coalition are stationed, said Iraqi and Western security sources. .

A battle between the United States and Iran’s allies

“The Iraqi security forces are leading the investigation,” Colonel Wayne Marotto, US spokesperson for the coalition, said on Twitter, as Washington regularly points the finger at pro-Iran armed factions for these attacks, which have multiplied those last weeks. The Iraqi military command specified that the ten rockets fired were of the “Grad” type. More precisely of the “Arash” type, detailed Western security sources, Iranian manufacture and more imposing than the rockets used until recently.

Sworn enemies, the Islamic Republic of Iran and the United States both have a presence or allies in Iraq. The United States, at the head of the coalition fighting the Daesh group, deploys some 2,500 soldiers there and Iran has, among others, the support of Hachd al-Chaabi, a powerful coalition of paramilitaries integrated into the Iraqi state composed mainly of armed factions financed and armed by Iran. While Iraq experienced relative calm in the fall with the announcement of a pro-Iran truce in the face of threats from the United States to purely and simply withdraw all its soldiers and diplomats from the country, an escalation has recently started. .

The puzzle of the pope’s visit

In February, rockets fell near the American embassy in Baghdad, then others targeted the Iraqi air base of Balad, further north, injuring an Iraqi employee of an American company in charge of the maintenance of F-16 . Rockets also hit a military base housing the coalition at the airport in Erbil, the capital of Iraqi Kurdistan, long seen as a haven of peace in a war-torn Middle East. Two people were killed, including a foreign civilian contractor working with the coalition.

Pope Francis is expected Friday in Baghdad and Sunday in Erbil where he is to celebrate mass in a stadium that will be filled with the faithful. Due to the precarious security stability in the country and the global Covid-19 pandemic, the Argentine sovereign pontiff will be deprived of the walkabouts he usually likes. In addition, to ward off the worst, national confinement will be decreed throughout the papal visit, from Friday 5 to Monday 8 March.