Tens of thousands of protesters in the streets against Jair Bolsonaro 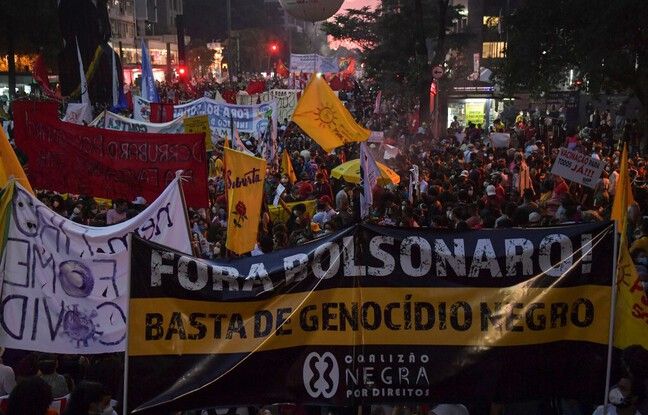 Tens of thousands of people demonstrated again on Saturday in several cities in Brazil against President Jair Bolsonaro and his disputed handling of the pandemic, which has claimed more than 461,000 lives and threatens to worsen again. In central Rio, some 10,000 masked people marched at the call of leftist organizations and student movements, shouting “Bolsonaro out!” Or “Bolsonaro genocide!” “.

“No one wants to be on the streets in the middle of a pandemic. Bolsonaro leaves no alternative. We are in the streets to defend lives. We are not going to wait for the (presidential election of) 2022. This is only the beginning, ”said Guilherme Boulos, leader of the Homeless Workers Movement (MTST). Since the start of the pandemic, which he described as “flu”, the Brazilian president has criticized the quarantine measures, promoted drugs with no proven effectiveness and questioned the effectiveness of vaccines.

Protesters believe that many deaths could have been prevented had the government launched the vaccination campaign earlier, which is progressing slowly. They also accuse the president of promoting Amazon deforestation, violence and racism. Demonstrations were organized in many Brazilian cities, including Salvador (northeast), Brasilia and Belo Horizonte (southeast). The organizers had asked the participants to respect the barrier gestures and distributed masks and hydro-alcoholic gel.

According to the G1 news site, a demonstration organized in Recife (northeast) was dispersed by the police with tear gas and rubber bullets. The rallies come after two weekends of demonstrations in support of the government called by Bolsonaro himself. Its popularity rate fell to 24%, its lowest level, according to a survey by the Datafolha institute. This poll also reveals that 49% of Brazilians are in favor of his impeachment, while 46% are against it. It places former left-wing president Lula da Silva, Bolsonaro’s great rival, in a favorite position to win the 2022 presidential election.