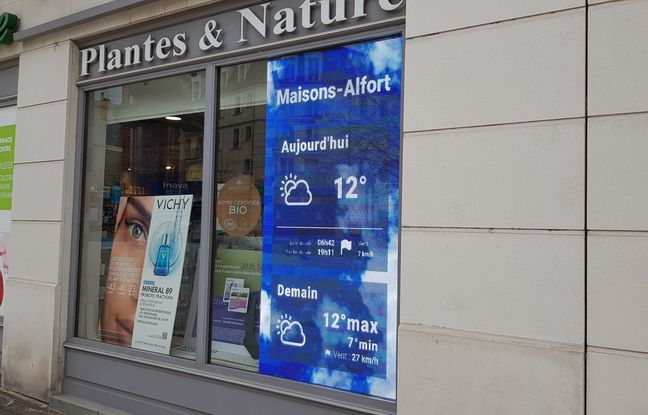 “Anger”, “vexatious measure”, “we are absurd” … The representatives of the traders did not deprive themselves, this Thursday, to pound the bill “Climate and resilience”, which must be debated next week in session plenary in the Assembly. Their “misunderstanding” focuses on article 7 of the text, which is partly inspired by the proposals of the Citizen’s Climate Convention.

It plans to allow mayors to frame advertisements and illuminated signs inside stores and visible from the street. Concretely, the councilors will be able to define criteria “of location, surface, height, energy consumption” and “prevention of light pollution” for the screens installed in the windows. The aim is to reduce their environmental impact.

“We fuck people for not much”

For the professionals concerned, this text goes much too far and should simply be withdrawn. “The mayors will get involved in the relationship between traders and their customers, by intervening on devices installed in stores. It is an attack on private property, ”denounces Guillaume Simonin, director of economic and legal affairs of the Alliance du Commerce (representing 450 brands in 27,000 points of sale).

“The electricity consumption of this type of product [écrans, enseignes lumineuses] is marginal compared to the total energy consumption in a store ”, adds Emmanuel Le Roch, general delegate of Procos (260 brands). Jean-Pierre Lehmann, president of the National Federation of Town Centers (FNCV), goes even further: “we piss off people for not much. It’s not a few less screens in the windows that will save the planet, let’s stop! “.

Traders are all the more upset that a week ago, thirteen elected environmentalists took the pen in the JDD to demand a toughening of the future law. The mayors of Grenoble, Lyon, and even Bordeaux want it to give them, clearly, the possibility of totally banning screens in shopping windows. “The proliferation of video advertising screens in the urban landscape subjects citizens to increasingly aggressive formats, inconsistent with ecological and public health issues (waste of energy and resources, light pollution impacting biodiversity, overexposure to screens…) ”they specified.

“The wording of the text is already broad enough for mayors to ban screens in their municipalities”, worries Guillaume Simonin. An opinion however contradicted by the recent declarations of the LREM majority during the debates in committee in the Assembly. “The mayor cannot forbid [les écrans dans les vitrines] – I have never said that he could do it (…) We trust the mayor to determine what is most relevant for his territory and his businesses ”, explained for example Aurore Bergé, co-rapporteur of the text of law, last March 11.

Too hard, too soft

« [Ce] is not a general and absolute ban on advertising installed inside shop windows, but simply a framework, ”added the Minister of Ecological Transition, Barbara Pompili. What reassure traders while despairing environmentalists, who hoped for a much more ambitious law.

“The provisions of article 7 (…) will have very little impact,” regretted deputy Delphine Batho at the same meeting. They will not apply where these digital video screens are massively deployed, that is to say subways, stations and airports (…) We end up with a text that does not change much in the current situation “. Too soft for some, too hard for others, there is no doubt that this part of the Climate Law will be hotly debated next week in the Hemicycle.