The Acropolis of Athens wakes up under a blanket of snow 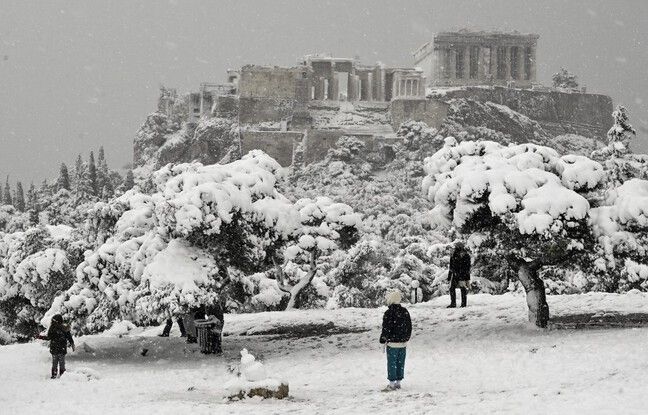 The Acropolis of Athens was enveloped in a blanket of snow on Tuesday, like other ancient sites in Greece, where the cold wave called “Medea”, a character from Greek mythology, considerably disrupted transport.

The Parthenon, the famous site of the 5th century BCE, was barely noticeable in the heavy snow showers that blanketed the capital overnight Monday through Tuesday.

An island without electricity for two days

The snowfall, which started on Monday and intensified in the evening, disrupted traffic on Tuesday morning in parts of central Athens, where vehicles had to wear chains to avoid getting stuck. The roadways were cluttered with a thick white powder in the northern suburbs of Athens, where there were not enough snowplows to clear the road network.

The mountains that surround the Athens basin also offered an exceptional spectacle, covered with an immaculate mantle, while part of the island of Evia had been without electricity for two days. An emergency ministerial meeting is scheduled for late Tuesday morning under the aegis of the Ministry of Citizen Protection to “coordinate” efforts and “manage this situation”, according to a statement from Civil Protection.

The main highway connecting the capital to Thessaloniki, the second largest Greek city in the north, has been closed to traffic since Monday evening to avoid traffic jams. Negative temperatures of -19 degrees Celsius were recorded in Florina, in the northwest of the country, according to the Greek News Agency, ANA. Strong winds forced the boats connecting Athens to the Aegean islands to drop anchor. Gusts of more than 100 km / h were recorded.

Civil Protection had warned Monday against “dangerous meteorological phenomena” but predicted Tuesday an improvement in weather conditions from Wednesday. The authorities have recommended the reduction of trips and announced the cancellation for Tuesday of the vaccination program against Covid-19 in Attica, Athens region.