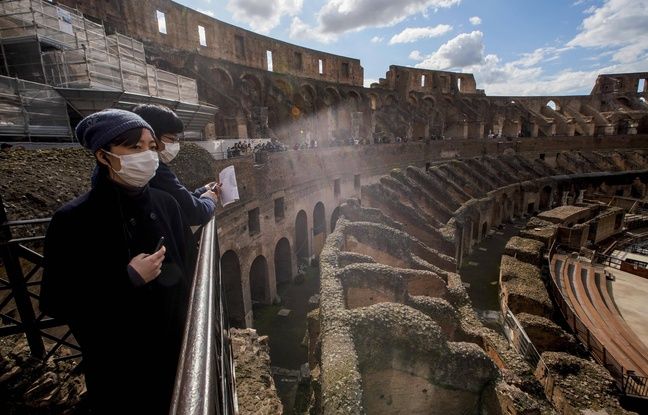 The Italian Ministry of Culture unveiled this Sunday an ambitious project to reconstruct the arena of combat in the Roman amphitheater of the Colosseum. It should allow visitors to walk there from 2023.

A Milanese engineering company won against ten competitors a call for tenders launched at the end of 2020, thanks to its project based on movable wooden slats and natural ventilation of the underground passages, which at the time housed animal circus games. savages and slaves.

Admire the monument from the center of the arena

“This is a new step forward towards the reconstruction of the arena, an ambitious project which will help the conservation of archaeological structures by recovering the original image of the Colosseum and its characteristic of a complex scenic machine”, s’ is delighted the Minister of Culture Dario Franceschini.

The #Colosseo will return to have its arena. After years of study, the winning project was announced. It will be reversible, it will allow you to visit the undergrounds and see the majesty of the Colosseum from the center, as it was for centuries until the end of the 19th century https://t.co/DG6UOKRcB4 pic.twitter.com/dI9XtY9dxV

He wants to allow visitors to admire the monument symbol of Italy from the center of the arena, as could still be done at the end of the 1800s. Currently, apart from a small platform, the Colosseum no longer has ground but reveals in the open the ruins of the walls and corridors of the arena undergrounds.

Major cultural events can also be held there, but there is no question of transforming the place into a performance hall. On July 29, Dario Franceschini intends to invite the ministers of a G20 of Culture to the Colosseum.

Work could start this year

The director of the archaeological park of the Colosseum, Alfonsina Russo, however, specifies that the land reconstruction project (3,000 m²) will only be accessible to visitors in 2023. Before the coronavirus epidemic, they were 25,000 daily tourists to go to the elliptical amphitheater, classified as a UNESCO World Heritage Site.

The reconstruction of the arena – which will be the subject of a European call for tenders of around 15 million euros – should start at the end of the year or at the latest in early 2022, to be completed in 2023, details Alfonsina Russo.

Most visited monument in Rome

The idea, launched in 2014, was inserted the following year in a funding envelope of 18.5 million euros dedicated to major projects of Italian cultural goods. The selected project, presented to the press on Sunday, will be a lightweight structure that can be completely dismantled and covered with acoya, a very resistant modified wood, explained its engineers.

The slats will be equipped with a rotation system to allow natural lighting and ventilation of the underground passages, which can also be revealed. The rainwater that bathes the bottom of the Colosseum will also be collected to better protect the ruins, but also to supply the public toilets of the most visited monument in Rome.

Share
Facebook
Twitter
Pinterest
WhatsApp
Previous articleBanks say they are ready to integrate cryptocurrencies into their financial products
Next articleNo, Rudy Giuliani, former mayor of New York, has not confirmed the existence of a pedophile ring in Washington