The country records a new record of 2,069 deaths in 24 hours 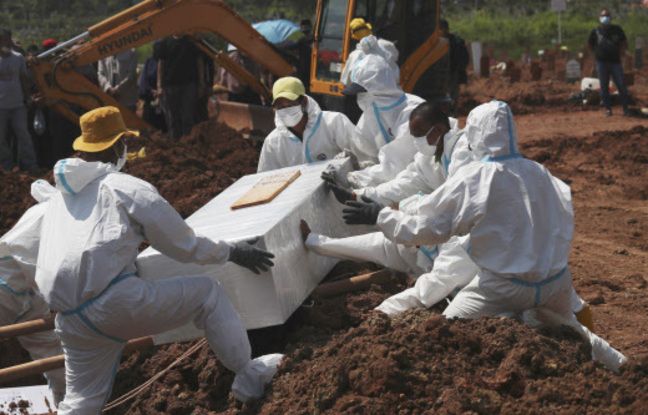 This gloomy record surpasses that of the day before. Indonesia recorded a new record of 2,069 deaths from Covid-19 in 24 hours on Tuesday, as the country suffers the most violent spike in contamination since the start of the pandemic. The number of new cases has crossed the threshold of 45,000, against 28,000 infections on Monday.

The worrying figures come as Indonesia eased restrictions this week, including allowing small shops, street restaurants and some shopping malls to reopen after a three-week partial lockdown.

Diffusion of the Delta variant

Health experts had warned of the risk of promoting a new wave of contamination, while the highly contagious Delta variant is rapidly spreading in the archipelago of 270 million inhabitants, now the epicenter of the pandemic in the world.

In the least affected areas of the Muslim-majority country, shopping malls and mosques were allowed to reopen on Monday with limited gauges and reduced hours. The offices must however remain closed.

Tens of millions of people live hand to mouth in Indonesia, which is why the government did not want to impose a lockdown as strict as in other countries.

Management of the epidemic criticized

But President Joko Widodo’s government has come under heavy criticism for its handling of the pandemic, with some accusing it of prioritizing the economy – Southeast Asia’s first – over public health. The Delta variant, which first appeared in India, has been detected in a dozen regions outside of Jakarta, Java and Bali, where the outbreak has also been virulent in recent weeks.

Since early July, nearly 19,000 foreign nationals, including many Chinese and Japanese, have left Indonesia through Jakarta International Airport, according to the immigration department. Indonesia is an important market for Japanese companies, and many companies there are supported by Chinese companies, with Beijing being the country’s largest trading partner.

The pace of vaccination in the Indonesian archipelago is significantly lower than the government’s target of one million doses per day in July. Less than 7% of the population received their two doses. The country has officially recorded more than 3.2 million cases, including 86,835 deaths linked to Covid-19. But experts are convinced that these assessments are far below the mark.

Poignant testimony from Simone Biles, who accuses the gymnastics federation of having “allowed” the abuses of Nassar

Manchester City’s official store clears all traces of the player