The Covid-19 is there, but the textile workers are going back to work 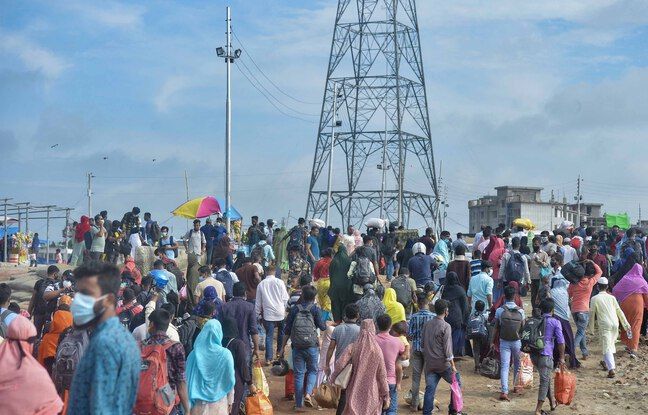 Business is business, pandemic or not pandemic. Despite a new wave of coronavirus in the country, hundreds of thousands of Bangladeshis stormed transport this Saturday in order to return to work. The government has in fact excluded factories supplying the main brands in Europe and North America from the new confinement imposed on the entire population. Authorities have ordered factories, offices, transport and shops to be closed from July 23 until August 5, with the number of new cases and deaths reaching record levels.

Officially, Bangladesh has recorded 1.2 million cases and more than 20,000 deaths since the start of the epidemic, but experts estimate that the real toll is four times higher.

Four million workers on the roads

Despite the confinement, the government has therefore announced that the country’s 4,500 garment workshops, which employ four million people, will be able to reopen from Sunday, causing a rush to industrial poles. Very influential, the owners of these workshops had warned of the “catastrophic” consequences of their inability to respond on time to orders from their foreign customers.

Several hundred thousand workers, returned to their villages to go through confinement and celebrate Eid al-Adha, the main Muslim religious festival, are trying to reach the capital, Dhaka, by all means, some do not. ‘not hesitating to walk in the monsoon. Sign of this exceptional influx, tens of thousands of workers waited hours to be able to board one of the boats leaving the Shimulia ferry station, 70 km south of Dhaka.

“The police carried out many checks and the ferry was packed,” one of these workers, Mohammad Masun, 25, who left his village at dawn, walking more than 30 km before, told AFP. to take rikshaws, to reach the pier. “It was a frantic race to get home when the confinement was announced, and now we are having the same difficulties returning to work,” lamented another worker, Jubayer Ahmad, interviewed by AFP.

The second largest textile exporter after China, Bangladesh, with a population of 169 million, has seen this industry become one of the cornerstones of its economy. Bangladesh Fabric Manufacturers and Exporters Association vice-president Mohammad Hatem said orders worth nearly $ 3 billion could be lost to the industry if factories remained closed. “The big brands would have gone to other countries to get their supplies,” he told AFP.