The death of Sarah Everard, a turning point in the fight against violence against women? 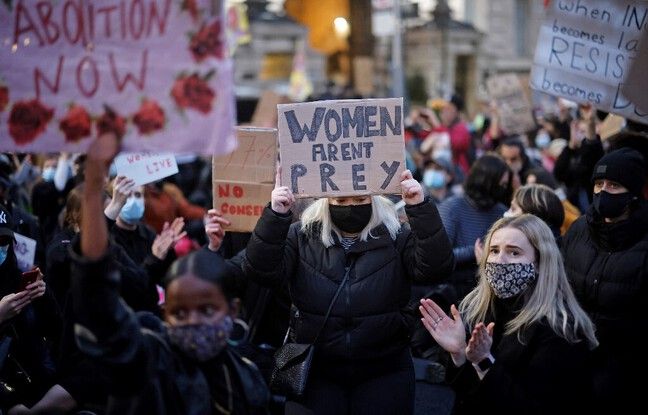 Wave of protest, questioning of the police and criticism of the government… The death of Sarah Everard, a 33-year-old Briton whose body was found in an undergrowth last week, caused a stir in the United Kingdom , leading to numerous demonstrations against violence against women.

After a controversial police intervention during these mobilizations, Prime Minister Boris Johnson announced new actions to fight sexual and gender-based violence. Will the murder of Sarah Everard mark a turning point in the UK on these issues? 20 Minutes make the point.

What happened to Sarah Everard?

Sarah Everard, a 33-year-old Briton, disappeared on March 3 in the middle of London, as she walked home after visiting friends. His body was found a week later, on March 10, in a wood in Kent (South East). A 48-year-old policeman, Wayne Couzens, an officer with the London Police Unit responsible for the protection of diplomatic representations, was charged with kidnapping and murder on Friday and is being held in custody.

What happened during the protests?

On Saturday evening, hundreds of people gathered in tribute to the young Londoner, despite the London police ban due to the coronavirus epidemic and health risks. Images showing young women being overpowered and handcuffed by the police caused a feeling of disgust. Calls for the resignation of Cressida Dick, the London police chief, have multiplied. The latter, however, said on Sunday that she did not intend to leave her post. The situation was such that the intervention of the police was “necessary”, she justified in a statement. “Hundreds of people were massed, posing a real risk” of transmission of the virus.

Why did this murder spark so many reactions?

For Clémence Fourton, lecturer in English studies at Sciences Po Lille, it was first of all the banality of the situation that shocked public opinion: “This young woman was going home, alone, one evening. It is a figure and a situation with which it is easy to identify ”. An idea shared by the author and feminist activist Caroline Criado-Perez: “She was returning on foot, which we have all done already, and we have all already felt fear,” she explained to Guardian.

According to Clémence Fourton, it was “the alignment of the planets” that triggered this wave of anger: “It’s more than a reaction to a news item. There is the murder, the fact that the suspect is a police officer, the police violence, and the bill on demonstrations ”.

What is this bill about?

The government recently introduced a law enforcement bill, severely restricting the right to protest in the country and strengthening the powers of the police during rallies. “This law was designed in reaction to social movements, to react more effectively to demonstrations or spectacular actions, such as that of Extinction Rebellion or feminists”, details Clémence Fourton. Which establishes a connection between gender-based and sexual violence, police violence and the right to protest. “The role of the police, the report to the police, its called into question. How are women treated when they go to file a complaint? How does justice deal with women? She continues.

How did Boris Johnson react?

In the aftermath of the protests, Boris Johnson announced that he wanted new actions to fight violence against women. “As long as there is not a change in our culture which recognizes and understands that women do not feel heard now, we will not solve this problem”, declared the Prime Minister this Wednesday in the Parliament. Among the avenues mentioned, Downing Street is considering more street lights and surveillance cameras, and plainclothes police to monitor pubs and nightclubs.

What are the figures for violence against women in the UK?

According to l’Evening Standard, London daily, 18,000 sexual assaults, including 7,172 rapes, were reported in the British capital between February 2020 and February 2021. Edifying figures in view of the judicial response: since 2016, only 5.5% of reported rapes have been followed up of a conviction. Home Secretary Priti Patel announced on Monday that an investigation launched by Downing Street into violence against women and girls had received 78,000 new reports in three days.

“The numbers are alarming. All young British women say they have experienced street harassment. On feminicides, it is the same order of magnitude as in France, there is approximately one woman killed every three days. There is endemic gender-based violence that is not unique to the United Kingdom, ”said Clémence Fourton. “Violence against women and girls is an epidemic, and it has reached endemic proportions,” said Andrea Simon, director of End Violence Against Women (Evaw), at Guardian.

What will be the consequences after these demonstrations?

While the UK government is considering further action, many women are calling for societal change. “We need a debate on the mechanisms of gender-based violence, on how to make it disappear. The key word is education, we need a cultural and behavioral change rather than adding streetlights ”, advocates Clémence Fourton. For many women, the UK is entering the second phase of the #MeToo movement: “Women share their stories, show the world the realities of gender-based violence and how deep and pervasive this problem is,” according to the British writer Mary Morgan, interviewed by the Guardian.

Many voices were also raised to denounce the low number of convictions: “Laws are only valid if they are implemented and combined with an informed understanding of how women are targeted by male violence,” argued Harriet Wistrich, the director of the Center for Women’s Justice, still in the Guardian.