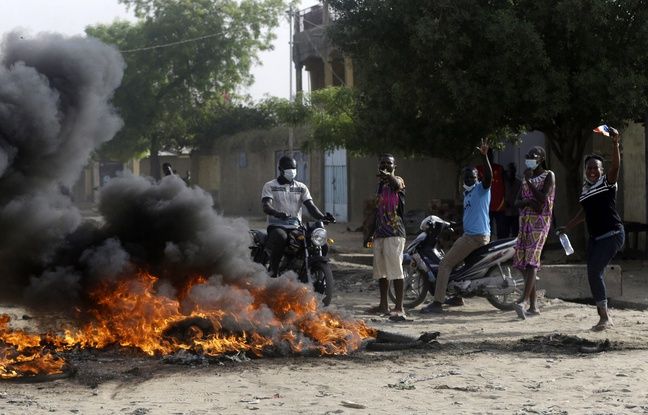 A week after the death of President Idriss Déby Itno, the situation is particularly unstable in Chad. At least five people were killed on Tuesday in sporadic protests in N’Djamena and in the south of the country against the junta that took power.

“There are a total of four dead in N’Djamena”, including a woman “killed by the demonstrators,” said Youssouf Tom, prosecutor of the capital. Earlier in the day, his counterpart in Moundou, Chad’s second largest city, some 400 km south of N’Djamena, also confirmed the death of a protester there. “We do not yet have the exact circumstances of the death, it is a young man of 21 years”, announced Ali Kolla Brahim. Police officers shot this young man who had just thrown a stone at their car, said Ahmat Malloum, a senior official in charge of state media in Moundou. The Chadian Convention for the Defense of Human Rights (CTDDH) announces a heavier toll. According to this local NGO, nine people were killed, seven in N’Djamena, two others in Moundou.

At midday, General Mahamat Idriss Déby had nevertheless tried to calm the spirits a little. The regime’s new strongman promised in a televised speech to organize “an inclusive national dialogue” during an 18-month transition period. The son of the late president, however, did not mention the protests once in this statement.

In his father’s footsteps

As his father, Marshal Déby, who ruled the country with an iron fist for three decades, systematically did, Mahamat Idriss Déby, who headed a Transitional Military Council (CMT), had banned demonstrations by Tuesday. The opposition and civil society who denounce an “institutional coup” and a “dynastic succession” to power had called for these gatherings.

In Paris, French President Emmanuel Macron “condemned the repression in the strongest terms” and called for “a peaceful, democratic and inclusive transition”. He is the only Western head of state to have attended Idriss Déby Itno’s funeral. France indeed considers Chad as its main military ally in the fight against jihadists in the Sahel. “Chad will continue to maintain its rank and assume its responsibilities in the fight against terrorism and will respect all its international commitments”, tried to reassure the new strong man of N’Djamena on Tuesday.