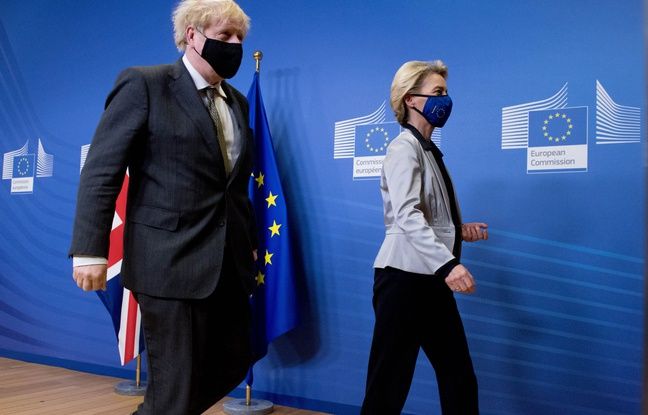 The European Union on Thursday published emergency measures for fishing and road and air transport, which will apply from January 1 if no post-Brexit agreement is reached by then with the United Kingdom.

“There is no guarantee that if an agreement is reached it will be able to enter into force in time. Our responsibility is to prepare for all eventualities, including that of not having an agreement in place with the United Kingdom by January 1, 2021 ”, explained the President of the European Commission, Ursula von der Leyen.

An extension of the discussions possible?

The publication of these measures comes the day after a dinner in Brussels between Ursula von der Leyen and British Prime Minister Boris Johnson, during which they noted persistent differences, giving themselves until Sunday to seal the fate of the negotiations.

But this Thursday, the head of the British diplomacy Dominic Raab judged Thursday “unlikely” an extension of the discussions between the United Kingdom and the European Union beyond the deadline of Sunday without “flexibility” and important concessions of the EU.

These measures had been demanded for a long time by certain Member States, increasingly concerned about the prospect of a failure with the United Kingdom, but the Commission had until then refused to present them in order not to hamper the talks. “The objective of these emergency measures”, which only concern sectors which would be “disproportionately affected” by a “no deal”, “is to cover the period during which there is no agreement. in place ”, explains the Commission.

“If no agreement comes into effect, they will end after a specified period,” she added in her statement.

Brussels first proposes to guarantee air transport connectivity between the UK and the EU for six months, “provided the UK provides the same.” A regulation is also presented to avoid disruption in aviation safety. For road transport, the European executive is advancing a text guaranteeing basic connectivity in freight and passenger transport for six months, on condition, again, of British reciprocity.

The question of fishing

Finally, its proposal on fisheries aims “to create the appropriate legal framework until 31 December 2021, or until the conclusion of a fisheries agreement with the United Kingdom” for “the maintenance of reciprocal access of EU and UK ships to the waters of the other party ”. Given the importance of fishing for the economic livelihood of many communities, it is necessary to facilitate the authorization procedures for fishing vessels ”, underlines the Commission.

The UK, which officially left the EU on January 31, 2020, will abandon the single market and customs union for good on December 31. Without a trade agreement on that date, trade between London and the EU will be carried out under the sole rules of the World Trade Organization (WTO), synonymous with customs duties or quotas, at the risk of a new shock for consumers. economies already weakened by the coronavirus.