The Ever Given container ship has started to move, after a week of blockage 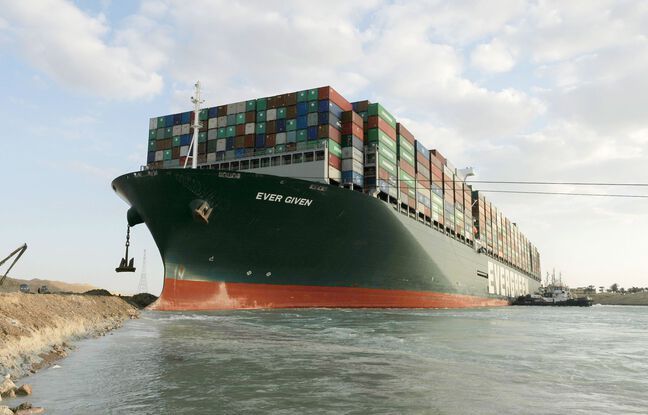 Unblocking in sight on the Suez Canal? The container ship Ever Given, 400 meters long and blocked since last Tuesday across the Suez Canal, has started to move. This advance raises the hope of a way out of the crisis which caused billions of dollars in losses.

The vessel has been “rotated” but is not yet floating, its owner said. The stern of the more than 200,000-ton vessel moved away from the west side of the canal, according to Vesselfinder and myshiptracking vessel traffic viewing sites on Monday morning. This was confirmed to AFP by a source on condition of anonymity at the Suez Canal. The Suez Canal Authority (SCA) had not yet released an official confirmation on Monday and it is not known when traffic will be restored.

In a statement issued around 5 am, the SCA confined itself to indicating that “the towing maneuvers to refloat the container ship Ever Given began with the aid of 10 giant tugs”. In addition, the Inchcape maritime service company announced for its part that the ship was “refloated”, information reported by several media.

At the end of the evening Sunday, on a report of failure of the attempts of refloating, the supplier of maritime services Leth Agencies had affirmed in a tweet that the operation was postponed “until the power of the tugs is sufficient”. However, for its part, the SCA did not announce any postponement, only to say in a statement in the early evening that “operations have been intensified around the bow of the ship”.

Hopes rested Sunday on a high tide in the evening which was to facilitate the task of the rescuers. SCA spokesman George Safwat said Sunday morning that some 27,000 m3 of sand had already been cleared, 18 meters deep. But the authorities admit to encountering difficulties, in particular because of the “rocky” nature of the ground.

According to Ihab Talaat el-Bannane, former Egyptian admiral, “the accident occurred in the part of the canal where the ground is rocky and which had moreover been the most difficult to dig”. The Panamanian-flagged container ship was surrounded on Sunday morning by a few tugs, according to an AFP journalist. About sixty meters high with its load, it dominates the surrounding fields and palm trees.

The surroundings were placed under close surveillance, with canal security agents but also soldiers and police. Ever Given has been stuck since Tuesday diagonally across the canal, completely blocking this waterway of about 300 meters in width, one of the busiest in the world.

The Suez Canal, some 190 km long, handles around 10% of international maritime trade and each day of downtime causes significant delays and costs. In total, nearly 400 ships were stranded on Sunday at the ends and middle of the channel connecting the Red Sea to the Mediterranean Sea, according to SCA. Insurer Allianz estimated on Friday that each day of downtime could cost global trade between $ 6 billion and $ 10 billion.