The ex-president’s speeches and tweets used against him 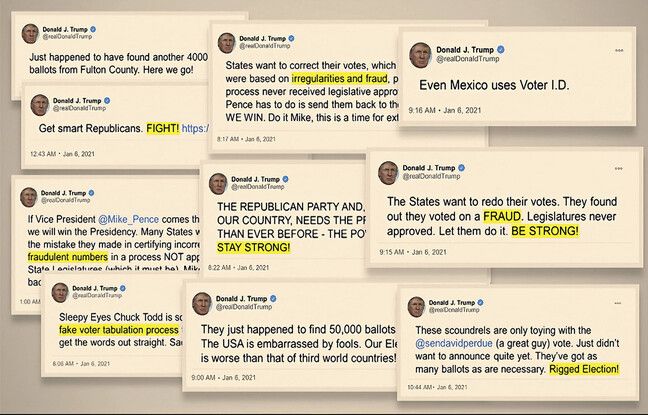 It is one of the pillars of American law: anything you say can be used against you. On the second day of Donald Trump’s impeachment trial before the Senate on Wednesday, Democratic prosecutors did not hesitate to use Donald Trump’s numerous speeches and tweets to incriminate him. According to them, not only is the former American president “the chief instigator” of the “insurgency” led by his supporters against the Capitol. But, they said, “his conduct was deliberate, planned and premeditated.” With the goal, prepared for several weeks, “to prevent the peaceful transfer of power”.

Anything you say can be used against you. According to the lawsuits, Trump has
– prepared the ground (if I lose, there has been fraud)
– the big lie: the election was stolen
– call to its supporters: stop the steal
– call to violence: fight like hell #TrumpImpeachmentTrial pic.twitter.com/n0WMgPfEIn

The elected Eric Swalwell divided the strategy of Donald Trump into four stages. According to him, Donald Trump first prepared the ground by assuring, at the end of October: “We are not going to let them steal this election from us, they can only win like that (…) the only way we can lose is there is massive fraud ”. Then, after his defeat on November 3, came what Democrats call the “big lie”: the election “was stolen”. Then Donald Trump mobilized his supporters with the “Stop the steal” campaign. Finally, he “incited them to violence” by calling them to “march” towards the Capitol and “to fight fiercely” (“fight like hell”).

“Groups that he cultivated for months”

For several hours, the “managers” (prosecutors) of the House went back on Donald Trump’s efforts to challenge the verdict of the ballot box. His 60 appeals to justice. His pressure on local officials not to certify the results, then on local elected officials to choose alternative major voters. His phone call to the Georgia Secretary of State to demand that he “find” a little over 11,700 votes to overtake Joe Biden.

And then “President Trump found himself short of nonviolent options to stay in power,” assured elected Ted Lieu. It was when he “turned to groups he cultivated for months” engaged Stacey Plaskett. She broadcast the video of the presidential debate in which Donald Trump called on the far-right Proud Boys group for calm but “to be ready”. Prosecutors have shown numerous screenshots of Internet users who have prepared to “invade the Capitol”, in particular on the social network Parler or the TheDonald.win forum.

Prosecutors have used several videos comparing Donald Trump’s January 6 speech with the reactions of his supporters. As he invites them to move with “force” towards Congress, assembled to certify the results, we hear the crowd listening to him shout “Let’s invade the Capitol. Take the Capitol! “

Video on the incitement (unpublished or that I had not seen): reaction when Trump calls to “walk” towards the Capitol and to show “force”, one hears in the crowd:
– “storm the capitol”
– “invade the capitole building
– “take the Capitol now”#TrumpImpeachmentTrial pic.twitter.com/BZMqbYJDEl

If many videos, largely from the social network Parler, were already known, several new video surveillance images have been unveiled. Police officer Eugene Goodman first alerted Senator Mitt Romney, when rioters had just entered the Capitol. Then he harangued the pack to keep them away from the doors of the Senate where there were still many elected officials.

Mike Pence was in an office with his family less than 30 yards away as the crowd sang “Hang on Mike Pence”. The vice president was evacuated two minutes after a tweet from Trump criticizing his lack of patriotism for refusing to challenge the results. Jamie Raskin, the Democratic chief prosecutor assured him: “Donald Trump committed the greatest betrayal of the presidential oath in the history of the United States (…) He must be condemned and disqualified (declared ineligible)”. The hearing continues this Thursday, then Donald Trump’s lawyers will have two days to defend him.