The government recognizes shortcomings in the monitoring of the attacker 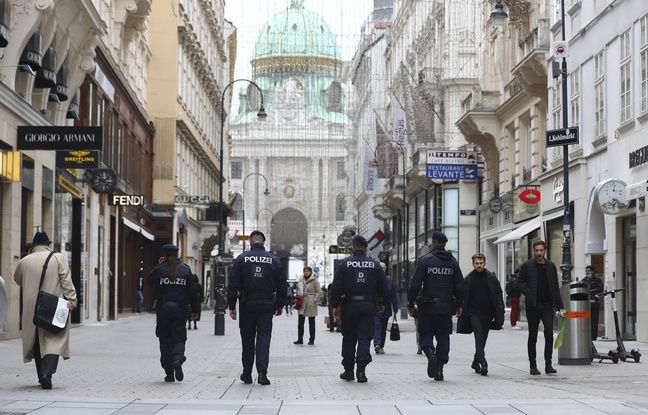 Two days after the murderous Islamist attack in Vienna in mourning, the Austrian government admitted errors on Wednesday. The country has in particular recognized flaws in the intelligence service and a failure of the deradicalization program to identify the dangerousness of the attacker. Kujtim Fejzulai, the young man of twenty who opened fire on Monday evening in the city center, killing 4 people and causing several injuries, had apparently started to foment his project in the summer.

A sympathizer of the jihadist group Daesh, which claimed responsibility for the attack, he had tried to obtain ammunition in Slovakia. The secret services of this neighboring country of Austria then alerted their counterparts in Vienna, Interior Minister Karl Nehammer explained on Wednesday. “There was obviously a problem in terms of communication afterwards”, he lamented, visibly shaken. And to accuse his far-right predecessor, Herbert Kickl, “of having caused lasting damage, not to say destroyed” the BVT (Office for the protection of the Constitution and the fight against terrorism).

He managed to “deceive” the people responsible for his monitoring

Another question that arises: how Kujtim Fejzulai, “soldier of the caliphate”, escaped the monitoring of the judicial authorities, of which he was known? Because this Austrian, whose parents are from North Macedonia, was sentenced to prison in April 2019 for trying to join the ranks of jihadist fighters in Syria but he was released in December before completing his sentence .

Integrated into a program of “de-radicalization”, Kujtim Fejzulai had succeeded in “deceiving” the people in charge of its follow-up, regretted the Minister of the Interior Karl Nehammer. It was “certainly not a good decision”, lambasted Conservative Chancellor Sebastian Kurz.

The attacker “has at no time been presented as de-radicalized”

This “terrible drama could have taken place even if the attacker had served his entire sentence, until July 2020”, however noted the DERAD association responsible for this program. The attacker “has at no time been presented as de-radicalized,” she said in a statement, while saying that he did not have the means of surveillance with which Austrian intelligence is equipped.

“I would describe him as a lost soul, who was looking for his place” in society, reacted his lawyer Nikolaus Rast, who had defended him during his trial in April 2019. “No one would have believed him capable of such a act ”.

Investigators, who seized “a large amount of material” during searches, are also seeking to determine possible complicity. They were still questioning 14 people on Wednesday, “aged between 18 and 28, from an immigrant background and some not being Austrian citizens” according to the minister. According to the police, “it is possible that they provided support” to the attacker but their exact role is still unclear.

At the scene of the attack, a few flowers and candles, still the chalk circles on the ground drawn by investigators, but life had resumed its course on Wednesday. The Viennese were thronging the subways and trams, the shops were welcoming customers again and the children had returned to school. Only restaurants remained closed due to containment in the face of the Covid-19 pandemic.

“Confirmed the theory of a single author”

The inhabitants had been asked the day before to stay at home for fear that a second assailant would be hidden in the capital, but the authorities have now dismissed this threat. The analysis of the videos, transmitted to the police by the numerous witnesses of the attack, “confirmed the theory of a single author”, underlined the Minister of the Interior.

Police remained on alert, however, in a nation that suddenly discovered that it too could be affected by serious Islamist attacks. In an interview with the German press, Sebastian Kurz called on the European Union to better fight against “political Islam”, an “ideology” which represents a “danger” for the “European model of life”.

With this in mind, he said he was thinking about “joint initiatives” with French President Emmanuel Macron, expected Monday in Vienna for a “short visit”.

For the experts, it was only a matter of time before Austria, breeding ground for “a whole Islamic nebula” with many candidates for jihad, was in turn targeted.