The junta threatens the protesters with death 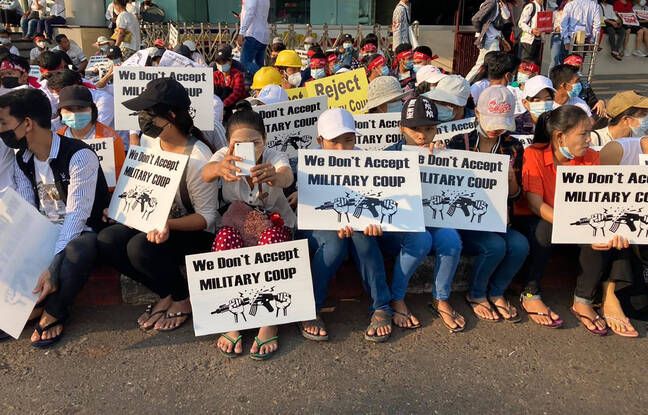 In Burma, the junta continues to harden its tone. After a weekend of bloody violence, the military in power warned protesters on Sunday that they risked death. However, this did not deter thousands of people from taking to the streets again on Monday.

Three weeks after the putsch of February 1, pro-democracy mobilization does not weaken with tens of thousands of demonstrators on Sunday, and a campaign of civil disobedience that disrupts the functioning of the State and the economy.

The UN is worried

“The demonstrators are inciting people, especially the exalted adolescents and young people, to embark on the path of confrontation where they will perish,” said the junta’s statement read on the public channel MRTV, and of which a translation English appeared on the screen. The text warned the demonstrators against the temptation to incite the population to “riot and anarchy”.

The UN special rapporteur for human rights in Burma, Tom Andrews, said he was deeply concerned by the threats. “Warning to the junta: unlike 1988, the actions of the security forces are recorded and you will have to be held accountable”, he threatened on Twitter.

The power’s warning did not deter protesters from taking to the streets of Rangoon, where thousands of people were gathered on Monday. In the Bahan district, for example, demonstrators were seated on the roadway holding up numerous banners in support of the former head of the civilian government, Aung San Suu Kyi, who has been held incommunicado since his arrest on February 1. The residents of Rangoon have seen a strengthening of security arrangements, with many police and army trucks in the streets. Demonstrations also took place in the towns of Myitkyina (north) and Dawei (south).

No internet at night

The government has also attacked communications by drastically restricting Internet access on the night of Sunday to Monday, for the eighth consecutive night, according to NetBlocks, a specialized observatory located in the United Kingdom. Connections are usually reestablished at 9 am. But the cut on Monday is expected to last three hours longer.

The escalation of tensions provoked new international condemnations, denounced Sunday evening by the Burmese Ministry of Foreign Affairs as “flagrant interference” in the internal affairs of the country. The European Union’s foreign ministers are therefore due to meet on Monday to discuss possible sanctions.