The lagoon reopened to cruises amid controversy 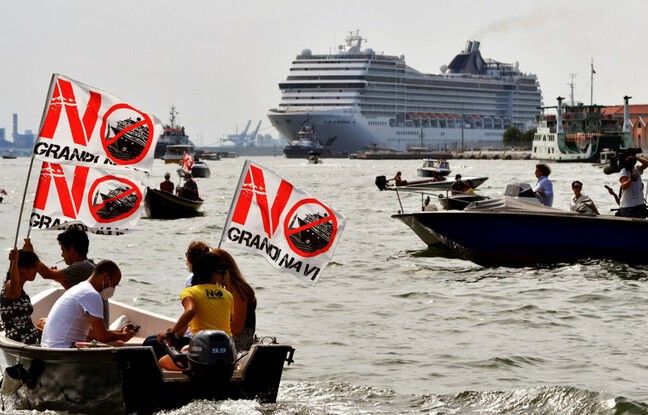 After a 17-month interruption due to a pandemic, a first cruise ship set sail on Saturday in Venice (Italy), arousing the controversy between supporters and opponents of the presence of these sea monsters in the famous Italian lagoon. The two camps each demonstrated on their own to defend their positions: as the huge silhouette of the MSC Orchestra loomed off St. Mark’s Square, demonstrators waving “No to cruise ships” banners shouted their opposition on board small motor boats.

Defenders of the environment and cultural heritage accuse the large waves generated by these ships, several hundred meters long and several storeys high, of eroding the foundations of the buildings of the Serenissima, a Unesco heritage site, and endanger the fragile ecosystem of its lagoon. Supporters of cruise ships, for their part, highlight the many jobs their presence generates for Venice, whose economy depends mainly on tourism, which particularly affected it during the pandemic.

The MSC Orchestra, which arrived empty this Thursday from the Greek port of Piraeus, left with around 650 passengers, who had to present a negative test dating back less than 4 days and undergo a new test to be able to board. The tourists have submitted to the strict security procedures in force, intended to prevent ships from becoming real mobile homes, as has been the case several times during the peak of the pandemic.

The MSC Orchestra is only allowed to embark a total of half of its capacity of 3,000 passengers, to comply with anti-Covid measures. It must stop in Bari (Puglia, southern Italy), Corfu (Greece), Mykonos (Greece) and Dubrovnik (Croatia). During its two-day stop in Venice, the ship was supplied by its on-board staff, who also took the opportunity to refine the safety protocols governing daily life on these giants of the seas.

The debate is not confined to Venice and has always had an international dimension, due to the notoriety of this tourist destination, one of the most popular in the world. On Tuesday, a plethora of international artists, from Mick Jagger to Wes Anderson via Francis Ford Coppola and Tilda Swinton, sent an open letter to Italian President Sergio Mattarella, Prime Minister Mario Draghi and the mayor of Venice to ask between others a “permanent stop” of cruise ship traffic.

This letter entitled “A Decalogue for Venice”, also signed by the former French Minister of Culture Françoise Nyssen, calls for better management of tourist flows, the protection of the lagoon ecosystem and the fight against real estate speculation, to protect “the physical integrity but also the cultural identity” of the city of the Doges.