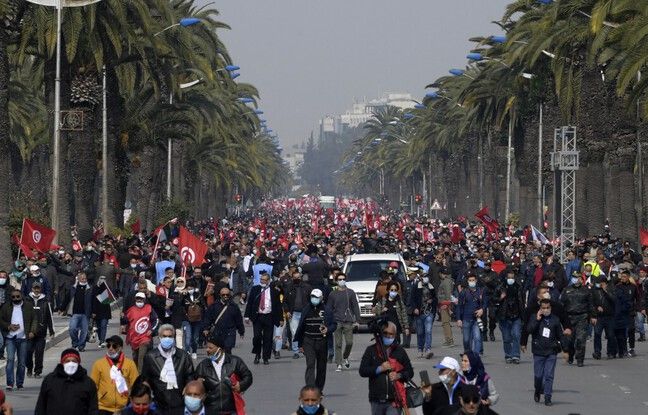 Thousands of supporters of the main party in power in Tunisia, Ennahdha, demonstrated on Saturday a show of force that risks accentuating the tensions in the midst of a standoff between this Islamist-inspired formation and the head of state , Kais Saied.

This demonstration, one of the most important in recent years, comes as the social crisis accentuated by the coronavirus pandemic is coupled with growing budgetary difficulties. Some public companies are struggling to pay salaries and donors are worried about the Tunisian debt rising.

The International Monetary Fund (IMF) warned in a statement Saturday on the urgency of reforms to reduce the deficit. He called for reducing the public wage bill and energy subsidies, stressing that “public debt would become unsustainable unless a solid reform program is adopted.” Kais Saied, an independent conservative who enjoys significant popularity, rejected in late January on suspicion of conflict of interest weighing on some ministers, a reshuffle wanted by Ennahdha to ensure the government the support of his parliamentary coalition.

The two camps focus on the interpretation of the Constitution and the prerogatives of each in this semi-parliamentary system. In the absence of a Constitutional Court, the conflict dragged on, paralyzing the government for six weeks. “The people want national unity,” chanted supporters of Ennahdha, waving flags in Tunis. Addressing the demonstrators, the leader of Ennahdha, Rached Ghannouchi, called for a dialogue between “all political forces” and to defend the Parliament and the institutions. “It is not for the president to decide on his own who can govern or not! », Declared Mohamed Khlif, who came from Sfax (east) despite the travel restrictions in force due to the pandemic.

Protesters, waving Tunisian flags and numerous banners, came from all over the country, and more than 100 buses were chartered to transport them. Ennahdha – who has dominated the political scene since 2011 but has seen her electoral base erode to control only a quarter of Parliament – “has shown that she is still capable of mobilizing in numbers”, believes political scientist Youssef Cherif. This mobilization “makes it possible to arrive at the negotiating table with this visible support”, but it risks complicating any dialogue, he adds. Party leaders have “gained confidence” in the face of a president hostile to any compromise.

“We are not reacting according to their calculations and arrangements, but according to our principles and commitments to the people,” Kais Saied said on Saturday evening, calling the protest “a waste of money.” Ennahdha has also reaffirmed itself in the face of a weakened left which also demonstrated on Saturday against Ennahdha, and the anti-Islamists of the Free Destourien Party (PDL), in full swing. But this show of force remains controversial even within Ennahdha, especially as the incessant power struggles contribute to discrediting the political class.

The standoff risks bringing down the government of Hichem Mechichi, say politicians, while the Prime Minister laboriously came to power 6 months ago. He took over from a government that had lasted only a few months. The political disputes that have hampered fundamental reforms since the 2011 revolution have intensified since the coming to power in 2019 of a fragmented and deeply divided Parliament. This “weakening of governance” prompted the rating agency Moodys to downgrade Tunisia’s sovereign debt rating this week, complicating its access to borrowing while the country has not completed its 2021 budget.

Hichem Mechichi, who had sacked 11 ministers including that of Health or the Interior, ended up entrusting these ministries to other members of the government already in place. “In these moments of crisis, there is a need for dialogue, and currently there is none, only interactive monologues,” said MP Ennahdha Samir Dilou. Tunisia “does not have the means to have at the same time a political crisis, a socio-economic crisis and the risk of a security crisis”.