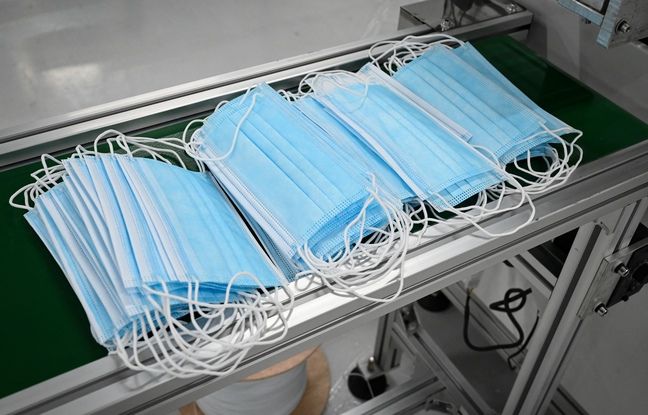 Today, the French fall behind the mask outdoors. For over a year, it has been an integral part of their daily lives. In March 2020, it had even become an object of covetousness, it was so lacking and it was hard to source, especially from Asian countries.

“We need to produce more in France, on our soil. To produce because this crisis teaches us that on certain goods, certain products, certain materials, the strategic character imposes to have a European sovereignty. Produce more on national soil to reduce our dependence and therefore equip ourselves over time, ”argued Emmanuel Macron, visiting one of the four companies producing FFP2 masks, near Angers.

This “made in France”, the government seems to have forgotten, after having pushed it so hard. It is in any case the feeling of the union of the French manufacturers of masks for which there is a small side “do what I say, do not do what I do”.

“He asked that we create this sector of French masks, the manufacturers mobilized and now we feel a lack of support. Typically in public calls for tenders, where we apply there is a price criterion that is too excessive. Suddenly, the people who win the contracts are importers of Asian products, ”deplores Alexandra Biescas, the general secretary of the union based in Flourens, in the Toulouse metropolitan area.

And the competition is tough. While the number of factories has increased from four to around thirty in France over the past year, in China, 70,000 additional factories have emerged since the start of the health crisis, supported by the Chinese government. Mass production, not to mention dumping, which lowered the price of the mask from 4 cents in 2019 to 1.8 cents today.

“This leaves us no chance of being able to safeguard this sector and ensure that if there is a next crisis that we are there. We need all public administrations to make an effort, to buy French, which guarantees them a supply chain, know-how, a reduced environmental footprint, ”argues Alexandra Biescas.

Les Ateliers de la Haute-Garonne, the company specializing in rivets and screws used in aeronautics where it works, made the choice to diversify last year to respond to the call of Emmanuel Macron. It has invested 22 million euros in a machine and participates in the monthly production of 100 million French masks, against 3.5 million before the crisis. Like its counterparts, when the State called on them to provide emergency supplies, they went the extra mile, hired people.

But rather than one-off orders, which do not allow for projections, manufacturers would prefer that sovereignty be established through long contracts, as in Germany or the Netherlands, where governments place them over four years.

“French production would be able to cover the current consumption of masks in France. He does not forget that this creates added value in France and jobs, ”recalls Alexandra Biescas, whose union is now in contact with the cabinet of Agnès Pannier-Runacher.