The murder of a young man beaten to death shakes the country, which denounces a “homophobic crime” 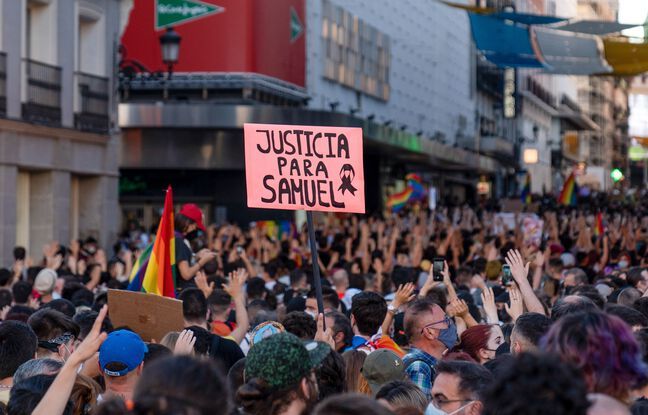 The murder of a young man beaten to death last weekend shook Spain where large demonstrations took place Monday to denounce a “homophobic crime”. Samuel, a 24-year-old nurse’s aide, was found unconscious outside a nightclub in La Coruña, in the northwest of the country, after being beaten up. The emergency services failed to revive him and he died this Saturday morning, say the Spanish media.

Spain rising it voice against fascism and homophobia 🏳️‍🌈✊🏻#JusticeBySamuel pic.twitter.com/kxnx1GzV8C

“Justice for Samuel. Homophobia and fascism are the same thing, ”proclaimed a gigantic banner held by demonstrators who left Monday evening from the famous Puerta del Sol square in Madrid. A crowd of several thousand demonstrators, some of whom were waving the Pride flag, responded to the call of many LGTB + collectives demanding “Justice for Samuel”, as the participants shouted.

“They are killing us”

“These are not blows, these are assassinations,” chanted the crowd. “Stop homophobia”, “All I want is to live” or “They are killing us”, could we read on some signs. Since his death, his relatives have denounced a homophobic crime, just a few days after the end of Pride week in Spain, a high place of LGTB + festivities.

Demonstrations took place on Monday evening in other Spanish cities, such as La Coruña, often bringing together several hundred people, according to photos and videos posted on social networks. On Monday, the Spanish Minister of the Interior Fernando Grande-Larlaska stressed that there had been no arrests for the moment and that “no lead was ruled out, neither that hate crime nor any other”.

I trust that the investigation of @police Find the perpetrators of Samuel’s murder soon and clarify the facts. It was a savage and ruthless act.

We will not take a step back in rights and freedoms. Spain will not tolerate it. All my support to his family and loved ones.

“I am convinced that the police investigation will soon find the perpetrators of Samuel’s assassination and shed light on the facts. It is a savage and merciless act. Rights and freedoms will not go back. Spain will not tolerate it, ”Socialist Prime Minister Pedro Sanchez tweeted on Monday evening.