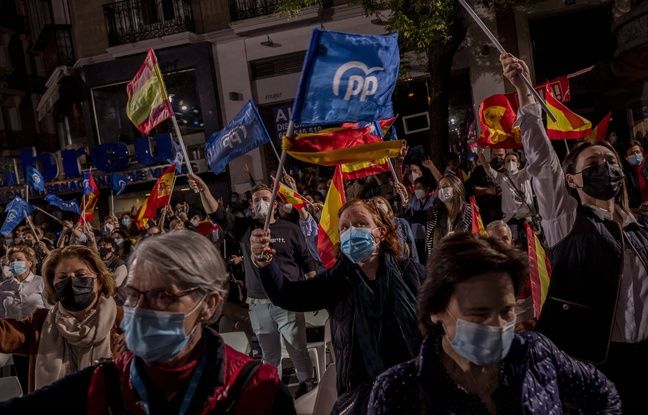 The regional in Madrid are reshuffling the cards of the national political game in Spain. The Spanish right and its rising figure, Isabel Díaz Ayuso, triumphed in these elections on Tuesday. It is above all a stinging setback for the Socialist Prime Minister Pedro Sanchez and his ally Podemos, whose leader has announced his withdrawal from political life.

“A new chapter in the history of Spain begins today,” said Isabel Díaz Ayuso, 42, in front of a compact crowd gathered in front of the headquarters of her formation, the Popular Party (PP), in the center of the Spanish capital. “Because today, starting from Madrid, from kilometer zero, we will find the pride (…) the unity and freedom that Spain needs”, “the days are numbered” for the leftist government of Pedro Sánchez, she added, claiming to address all Spaniards.

Towards an alliance with the far right

According to almost final results, Isabel Diaz Ayuso doubled her score in the last regional election in May 2019, totaling more than 44% of the vote and 65 seats out of 136 in the regional parliament. The PP, which has led the region for 26 years, does not have an absolute majority, will however have to rely on the far-right Vox party. The latter had already supported Isabel Díaz Ayuso for two years and indicated on Tuesday evening that she could count on his votes.

Leading in 2019 in the region, the Socialists (24 seats) lose 13 regional deputies, while the left as a whole totals only 58 seats. Despite the pandemic, the more than 5.1 million voters turned out en masse, with turnout estimated at 75%, an increase of more than 10 points compared to the previous election.

“You have to know how to withdraw”

This very strong mobilization reflected the national scope of the ballot, whose very tense campaign was marked by the sending of letters of death threats to candidates containing bullets. The PP had also presented this election as a step on the way to its return to power in Spain.

The failure is therefore bitter for Pedro Sánchez, who had personally invested in the campaign. The ballot has already made a direct victim: the leader of Podemos, Pablo Iglesias, who announced his withdrawal from political life after the rout of the left. “When you cease to be useful, you have to know how to withdraw,” explained the man who had left his post as vice-president of the Sánchez government to lead his party to battle in these regions. This decision marks the end of a chapter for Spanish politics, of which the former professor of political science was one of the main faces since the creation of his radical left formation in 2014.