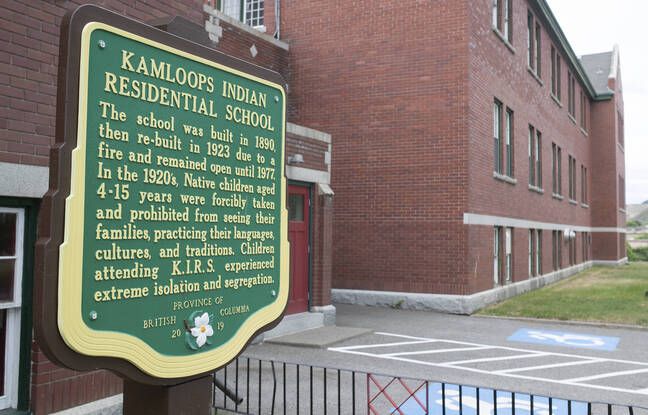 Faced with this terrible discovery, Justin Trudeau says he is “heartbroken”. The remains of 215 children have been found buried at the site of a former residential school in Canada established over a century ago to assimilate Indigenous peoples into mainstream society, according to a local Native American community.

An expert spotted the human remains last weekend using geo-radar at the site of this former residential school near Kamloops, B.C., the indigenous community Tk’emlups te Secwepemc said in a statement. “Some were only three years old,” said chef Rosanne Casimir.

According to her, the death of these children, whose cause and when it is unknown, has never been documented by the management of the boarding school, even if their disappearance had already been mentioned in the past by members of this community.

“A sad reminder of this dark chapter in our history”

The preliminary findings of the investigation are expected to be published in a report in June, said Rosanne Casimir. In the meantime, the community is working with the province’s medical examiner and museums to try to shed light on this horrific discovery and find any documents relating to these deaths.

“My heart is broken,” responded Canadian Prime Minister Justin Trudeau on Twitter. “It is a sad reminder of this dark chapter in our history. I think of all those affected by this shocking news, ”wrote the leader, who has made reconciliation with Canada’s first peoples one of his priorities since taking office in 2015.

The former boarding school run by the Catholic Church, on behalf of the Canadian government, was one of 139 such establishments established in the country at the end of the 19th century and which have existed until the 1990s.

Some 150,000 Native American, Métis and Inuit children were forcibly enrolled in these residential schools, where they were cut off from their families, language and culture. Several have been subjected to ill-treatment or sexual abuse, and at least 3,200 have died there, most of them from tuberculosis, according to the findings in 2015 of a national commission of inquiry.

The commission had gathered several testimonies of Native Americans affirming that the misery, alcoholism, domestic violence and high suicide rates, still a lot in many of their communities, are largely the legacy of this residential school system.

In 1910, the principal of the Kamloops school complained about insufficient funding from the Canadian government to “adequately feed the students,” according to the community statement.

Ottawa had issued a formal apology to the survivors of these residential schools in 2008 as part of an agreement of 1.9 billion Canadian dollars (1.3 billion euros).

The latter were victims of a “cultural genocide”, concluded the national commission of inquiry.

In the Canadian Arctic, Inuit culture grapples with global warming