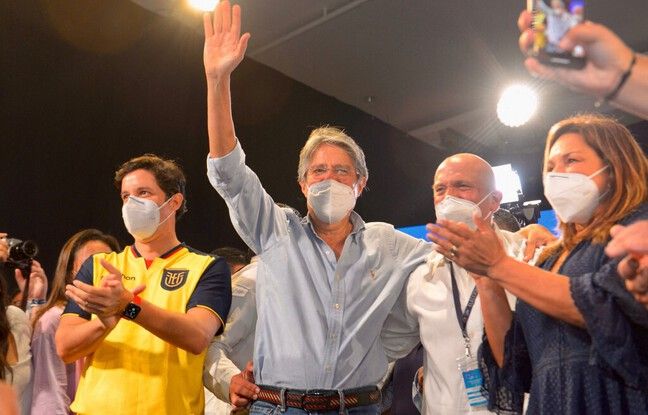 The former conservative banker, Guillermo Lasso, was elected President of Ecuador this Sunday, facing the young economist Andrés Arauz, foal of the former socialist leader Rafael Correa, in this indebted oil country, whose crisis has ended. worsened with the coronavirus pandemic.

After two previous attempts, Guillermo Lasso, 65, will succeed the unpopular Lenin Moreno, who will complete his four-year term in May. Ahead of his opponent by more than five points, he obtained 52.51% of the vote against 47.49% for Andrés Arauz, according to 93.14% of the votes counted.

“On May 24, we will assume with responsibility the challenge of changing the destiny of our homeland and to reach for all the Ecuador of opportunities and prosperity to which we aspire”, he promised from Guayaquil (southwest ), his hometown. His 36-year-old left-wing rival admitted defeat: “I will congratulate him on the electoral triumph achieved today and demonstrate our democratic convictions to him,” he said.

Some 13.1 million voters were called upon to separate Andrés Arauz, who won the first round on February 7, from Guillermo Lasso, previously defeated by Rafael Correa, who ruled the country for ten years until 2017, then by Lenin Moreno. Election day went off without incident, according to the National Electoral Council (CNE). After the close, Andrés Arauz risked getting ahead of the official results and declaring himself the winner, citing an exit poll giving him a 1.6% lead over his rival.

For a “free Ecuador”

Guillermo Lasso said he was ready to give his “life to the people”, promising “a free and democratic Ecuador”. A follower of free trade, he aims for a “zero deficit so as not to increase the debt” and has promised to create two million jobs. The GDP of this dollarized country of 17.4 million people contracted 7.8% in 2020 and the global debt reached 63.88 billion dollars (63% of GDP). Ecuador is also very affected by the pandemic, with some 340,000 cases of Covid-19, including more than 17,000 deaths. Andrés Arauz, candidate for the Union pour l’Esperance coalition (Unes, left), led the first round with 32.72% of the vote, against 19.74% for his rival from the Create Opportunities movement (Creo, right ), follower of free trade.

“The situation is chaotic. There is no work (…) we have to change, ”said Santiago Esteiner, 64, an automobile electrician, voting for Andrés Arauz. “This country needs jobs,” also said Enrique Lumaño, 34, a construction worker who leaned towards Guillermo Lasso. The results of the first round were contested by Yaku Pérez, a left-wing indigenous lawyer, who came third with just 0.35% behind Guillermo Lasso. Against a background of polarization between Corréistes and anti-Corréistes, his Pachakutik party had therefore promoted the null vote, which reached 16% on Sunday, according to the partial results published by the CNE, against 9.55% in February.

Three presidents overthrown between 1997 and 2005

If they constitute only 7% of the population, the Amerindians are a feared social force. They organized the violent 2019 protests against austerity, which left 11 dead and more than 1,300 injured, and helped topple three presidents between 1997 and 2005. The director of the Market institute, Blasco Peñaherrera, had predicted d ‘an “uncertain” ballot because of the large number of undecided. The election was played out between a return to socialism and an accentuation of the turn to the right, initiated by Lenin Moreno to the chagrin of his predecessor and ex-ally Correa. The former president, who lives in Belgium, the country of his wife, and was sentenced in absentia in 2020 to eight years in prison for corruption, wished Guillermo Lasso good “luck” on Sunday, saying on Twitter that “his success will be that of Ecuador ”.

During an interview, Andrés Arauz defended himself from being the puppet of his mentor: “The one who will govern, it will be me!” “But he paid for Sunday the fact of” not being able to take off the image of Correa, “said Pablo Romero, analyst at Salesiana University. According to professor Wendy Reyes of the University of Washington, Guillermo Lasso succeeded in “converting the undecided”, “managed to connect with this voter disappointed with Correism and politics in general”. However, he will have to deal with the Unes which, without being in the majority, imposed itself as the first parliamentary force in the legislative elections in February.