The sinking ship fire was extinguished after 13 days 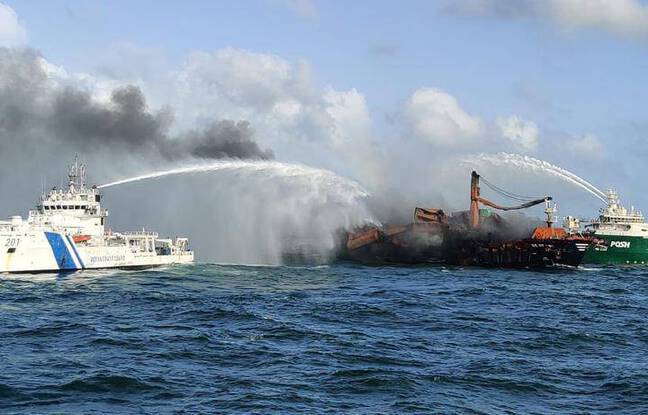 Tons of microplastic granules from its cargo have littered Sri Lanka’s beaches, leading to a fishing ban and causing ecological disaster. Thousands of soldiers have been sent to start collecting these plastic balls which pollute the beaches. The Navy spokesman said the stern of the 186-meter container ship sank about a meter.

It was carrying 278 tonnes of fuel oil

He said firefighters’ water jets had been shut down to prevent further water build-up, but some areas of the ship were still too hot to conduct a full examination of the building, which caught fire on May 20. Navy divers carried out examinations below the waterline to make sure there were no cracks in the hull of the ship, which also carries 278 tonnes of fuel oil and 50 tonnes of diesel.

The Sri Lankan Navy received reinforcements from the Indian Coast Guard and tugboats chartered by SMIT to fight the flames, which destroyed most of the ship’s approximately 1,500 containers. The fire was reported on May 20, as the vessel was about to enter Colombo port. The crew first managed to contain it, before the strong winds accompanying the monsoon fanned the fire, forcing the crew to evacuate on May 25.

The ship, registered in Singapore, carried 25 tons of nitric acid and other chemicals, as well as 28 containers of plastic raw materials, most of which fell overboard. Marine Environment (MEPA) Dharshani Lahandapura said he believed it was the “worst accident ever in his lifetime” in the region from an ecological point of view.

He added that the crew were apparently aware of a nitric acid leak on May 11, long before the ship entered Sri Lankan waters, en route to Malaysia and Singapore. Sri Lanka opened a criminal investigation on Monday. Police spokesman Ajith Rohana said the captain and chief engineer, both of Russian nationality, had been questioned for 14 hours since Monday.

The leak would have started the fire

The ship was heading for Colombo from Gujarat, India. He had previously traveled to Qatar and Dubai, where the nitric acid containers had been loaded.

Sri Lankan authorities suspect that the acid leak started the fire. A Sri Lankan court on Tuesday ordered the confiscation of the passports of the three main crew members pending a full investigation. Sri Lankan President Gotabaya Rajapaksa has asked Australia for help in assessing the damage to the environment.