The son of the US president, Donald Trump Jr, positive for Covid-19 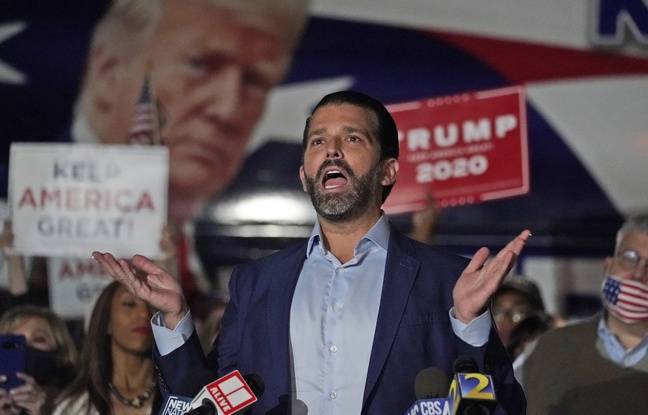 Donald Trump’s entourage continues to be infected with the coronavirus. This time, it is Donald Trump Jr, eldest son of the US president who tested positive for Covid-19, his spokesperson announced on Friday. Very present, and very virulent, throughout the presidential campaign, he has, on numerous occasions, like his father, minimized the impact of the pandemic, which has so far killed more than 254,000 people in the United States.

“Don tested positive at the start of the week and has been in quarantine in his country home since having the result,” said his spokesperson, adding that he had absolutely no symptoms. In early July, his girlfriend, Kimberly Guilfoyle, a former Fox News presenter, had also tested positive for Covid-19. President Donald Trump himself announced in early October that he had tested positive, as had his wife Melania. He had been hospitalized for several days at Walter Reed’s military hospital in suburban Washington. A few days later, the First Lady announced that their son Barron had also been infected with the new coronavirus.

More recently, it was Donald Trump’s chief of staff, Mark Meadows, who was infected in turn around the election, along with at least three other people in the White House. Housing secretary Ben Carson said on Friday he was off the hook after being “very seriously ill”.

The announcement of the positive test of Donald Jr, 42, comes a few hours after that of Andrew Giuliani, son of Rudy Giuliani, personal lawyer of the American president. Particularly present on Twitter, Donald Trump Jr is one of the fiercest – and most aggressive – defenders of his father, who still refuses to recognize the victory of Joe Biden, two weeks after the announcement of the presidential results.

A few days after the election, he called for a “total war” against what he considered to be “fraud” and “cheating,” which no concrete evidence came to accredit at this stage.

The epidemic is in “exponential” phase in the United States, according to health authorities. More than 200,000 new cases were recorded in 24 hours between Wednesday and Thursday, as well as more than 2,000 deaths, a bar that had not been crossed for months. Americans have been urged not to travel on Thanksgiving, November 26, the largest family holiday in the United States, when attendance records are traditionally broken at airports and on the roads.