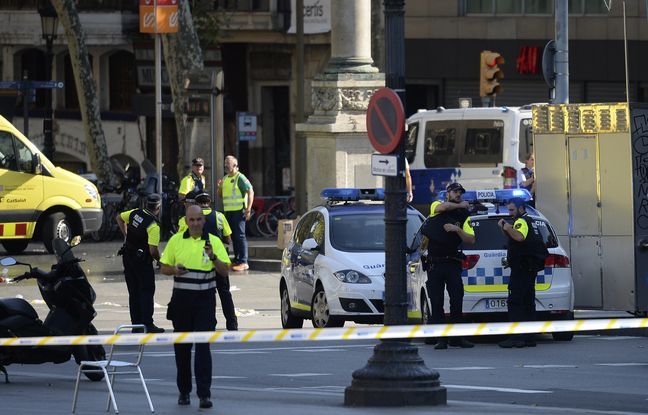 The trial of the attacks of August 17 and 18, 2017, claimed by the Daesh group and which left 16 dead and 140 wounded at the start of Tuesday. Three men are suspected of having helped the jihadist cell responsible for the double attack that occurred on the famous avenue des Ramblas, in the center of Barcelona, ​​where a ram van had darkened on passers-by, as well as the seaside resort of Cambrils, at 100 km further south.

Organized under heavy police surveillance, the trial began around 10:15 am (9:15 am GMT) in front of the National Court of Audience in San Fernando de Henares, in the eastern suburbs of Madrid. It is to last until December 16. Sitting a meter and a half from each other and masked, two suspected members of the jihadist cell and a man presented as an accomplice are on the dock, in a glass box.

The perpetrators of the double attack were killed by police bullets, including Younes Abouyaaqoub, the 22-year-old Moroccan who drove the van on the Ramblas, killing 14 people there, mostly foreign tourists, and injuring more than one. hundred. In his flight, he had murdered another person to steal his car.

A few hours after the Ramblas massacre, five other members of the cell carried out the second attack on the Cambrils seafront, running over several people there with a vehicle before fatally stabbing a woman. The five men were then shot dead by the police, as was Younes Abouyaaqoub, killed in a vineyard near Barcelona a few days later.

The main accused ensures “to be a repentant”

The trial began with statements from the main defendant, Mohamed Houli Chemlal, 23, charged with membership in a terrorist organization, manufacturing and possession of explosives, as well as conspiracy to cause chaos. The prosecution requested 41 years in prison against this man from the Spanish enclave of Melilla, on the north coast of Morocco.

Gray and navy blue tracksuit, Chemlal claimed “to be a repentant” and insisted on his “willingness to collaborate” during the investigation. The young man had explained to investigators that the cell’s original plan was to carry out bombings against famous sites, such as the Basilica of the Sagrada Familia in Barcelona.

The Eiffel Tower was among the targets

Documents found during the searches revealed that Camp Nou (FC Barcelona’s stadium) and even the Eiffel Tower in Paris were also among the potential targets. The plans of the cell were thwarted by the accidental explosion of their hideout in Alcanar (200 kilometers south of Barcelona) where the jihadists were making explosives.

The 44-year-old Moroccan imam, Abdelbaki Es Satty, who had indoctrinated the cell – a bubble made up of four pairs of brothers where the cult of secrecy reigned – was killed instantly. Chemlal had been injured. This accident had precipitated the passage to the act of the group and had pushed it to improvise the attack of Barcelona and that of Cambrils. Several videos showing the youths trying on explosive vests and joking about the “big damage” they could do were shown during the hearing.

“I have no connection with them”

The second accused, Driss Oukabir, 31, the brother of one of the jihadists killed, faces 36 years in prison for having rented the van used on the Ramblas. “I have no connection with them”, he assured, affirming that his brother had asked him to rent the vehicle for a move. “I was neither a religious nor a practitioner,” he said again, explaining that he was an alcohol and drug user.

The last man on the dock, Said Ben Iazza, 27, faces eight years in prison for lending a vehicle and papers to the attackers.

No prosecution for the attacks themselves

The trio are not, however, prosecuted for the attacks themselves, contrary to the wishes of the civil parties. “The fact that these people did not participate materially (…) in the assassinations does not mean that we cannot accuse and condemn them” for terrorist assassinations, declared before the start of the trial Antonio Guerrero, lawyer of the association of victims of terrorism.

Among the 16 victims of the double attack from several countries (Spain, Germany, Argentina, Australia, Belgium, Canada, United States, Italy, Portugal), were two children aged 3 and 7, crushed on the Ramblas.