The United States will give 500 million doses to poor countries, including 200 million in 2021, details Biden 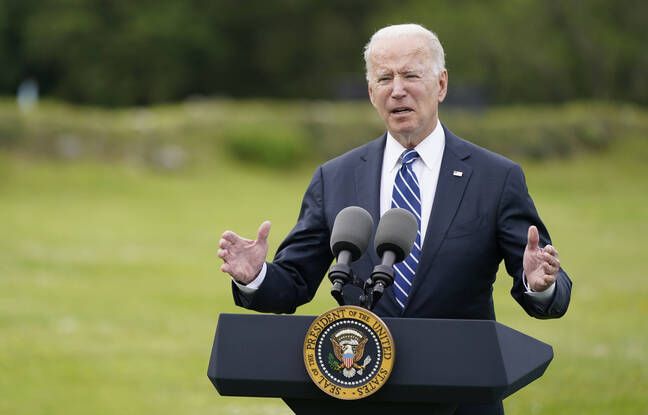 According to Joe Biden, this is a “historic step” in the fight against the pandemic. On Thursday, the US president gave details of the donation by the United States of 500 million anti-Covid vaccines to poor countries. “Our humanitarian duty is to save as many lives as possible”, insisted Joe Biden on the eve of the opening of the G7 summit in Cornwall (United Kingdom). “It is also in the interests of the Americans,” he added.

The purchase of 500 million doses of vaccine from Pfizer / BioNTech to donate to other countries in need is “the largest vaccine order and donation by any one country and a commitment by the American people to help protect populations around the world against Covid-19, ”said the US executive.

These vaccines will be distributed to “92 countries” underprivileged through the Covax system, set up to ensure equitable distribution of vaccines. They will start shipping in August, with 200 million doses delivered by the end of the year. The other 300 million will be delivered by June 2022.

“Once again, the United States has answered the call”, welcomed alongside Joe Biden the CEO of Pzifer, Albert Bourla, explaining that all the inhabitants of the planet had the right to be vaccinate regardless of their financial situation or their origins. “We are grateful to you,” he added.

With nearly 64% of American adults having now received at least one dose, the White House is trying to position itself as a leader in the planetary fight against the pandemic, which has killed more than 3.76 million, including nearly 600,000 in United States. However, if part of the population of rich countries returns to a normal life thanks to vaccination, this progress is still fragile and must be extended to less privileged countries.

Covax fails to operate at full capacity. As of June 4, the device had delivered more than 80 million doses to 129 countries and territories, far less than expected. Nearly 90% of African countries will miss the global target of vaccinating one tenth of their population by September if they do not urgently receive at least 225 million vaccines, the World Health Organization warned on Thursday. . The WHO calls on the rich countries, once their population is vaccinated, to share their stocks of vaccines with the less privileged countries, in order to save lives, but also to make it possible to eradicate the epidemic at the global level.

Towards a lifting of patents?

Donating doses or lifting patents protecting vaccines can facilitate vaccination across the planet: the European Parliament, in disagreement with the European Commission, voted on Thursday for a temporary lifting of patents in order to develop production and ” improve global access to affordable medical products ”. In the 53 territories of the European region according to WHO criteria, 30% of the region’s population has received a first dose of vaccine and 17% are fully vaccinated.

Yet as European countries ease their restrictions, the WHO has called on them not to let their guard down. “Vaccination coverage is far from sufficient to protect the region from a resurgence,” WHO European director Hans Kluge warned Thursday, calling for maintaining barrier measures and avoiding travel abroad. “There is still a long way to go to achieve coverage of at least 80% of the adult population,” he said. “We are far from being out of danger.”