The vaccination campaign will start well on Monday 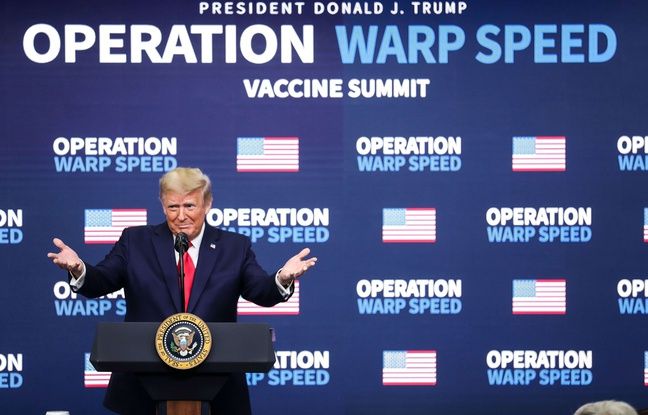 The Pfizer-BioNTech vaccine against Covid-19 will arrive by Monday morning at hospitals and other sites in the United States, ready to be injected into the arms of millions of Americans, American authorities said on Saturday, so that the number of deaths attributed to the virus worldwide is around 1.6 million. This mass vaccination campaign is about to start in the United States, the hardest hit country in the world with 297,697 deaths from Covid-19.

Infections in the United States have skyrocketed, with 1.1 million new cases confirmed in the past five days and the death toll now approaching 300,000. US President Donald Trump said Friday evening that the first injections of the first Pfizer-BioNTech vaccine would take place within 24 hours, that is to say on Saturday.

“The distribution has started” and “the first shipments will arrive on Monday morning”, finally declared General Gus Perna, of Operation Warp Speed ​​(speed of light) set up by the US government to ensure the delivery of the vaccine. . “We are 100% operationally confident that we will deliver the vaccine to Americans” at that time, he added, predicting that 145 sites across all states would receive the vaccine on Monday, 425 more sites on Tuesday. and 66 Wednesday. This first phase concerns around three million people.

The United States on Friday became the sixth country to approve the vaccine from the American-German alliance, after the United Kingdom, Canada, Bahrain, Saudi Arabia and Mexico. The European Medicines Agency is expected to issue an opinion by the end of December.

“We worked quickly because of the urgency of this pandemic, not because of any external pressure”, assured Saturday the boss of the United States Medicines Agency (FDA), Stephen Hahn, during a virtual press conference, also relativizing the risks associated with “serious allergies”. French laboratories Sanofi and British GSK suffered a setback: their anti-Covid vaccine should not be ready until the end of 2021, after results less good than expected in the first clinical trials.