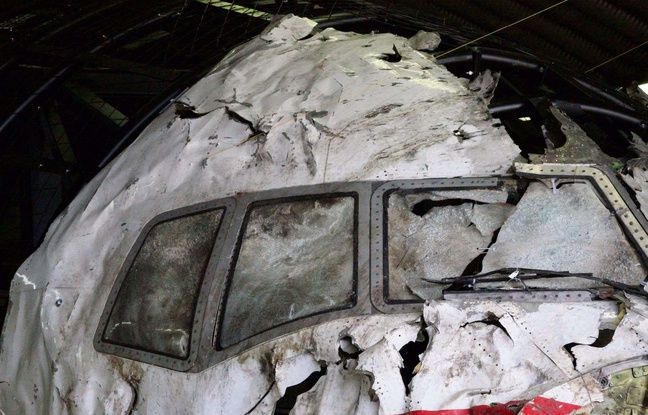 Dutch judges inspected the impact-riddled wreckage of Malaysia Airlines flight MH17 on Wednesday. This was part of the trial of four people for their role in the destruction of the aircraft over Ukraine in 2014.

The wreckage is in a hangar at Gilze-Rijen Air Base in the south of the Netherlands. Part of the Boeing 777 could be reconstructed there using in particular pieces from the front.

The trial of three Russians and a Ukrainian accused of murder and for having been deliberately involved in this tragedy began in March 2020. They are being tried in absentia. “We realize that this visit to the reconstruction of the MH17 within the framework of the official criminal proceedings will be very emotional for the relatives”, declared the presiding judge Hendrik Steenhuis. “This is a reconstruction of a plane in which their loved ones were on their way to a destination they have never reached,” he added.

Judges inspected the exterior of the painstakingly reconstructed wreckage, still coated in Malaysia Airlines white, red and blue paint, then climbed a ladder to examine the damage inside the aircraft. The prosecution and defense also inspected the wreckage, which was transported from Ukraine by train and plane to the Dutch air base.

The Boeing, which left Amsterdam for Kuala Lumpur on July 17, 2014, was hit in mid-flight by a Soviet-designed BUK missile, investigators said, over the area of ​​armed conflict with pro-Russian separatists in the east. from Ukraine. All 298 people on board, including 196 Dutch, were killed.

The international team of investigators, led by the Netherlands, established in May 2018 that the plane was shot down by a BUK missile from the 53rd Russian anti-aircraft brigade based in Kursk (southwest). Oleg Poulatov, one of the suspects, said in November 2020 that he saw no sign of the type of missile the prosecution was using to bring down the device.