Third night of clashes and no respite in sight 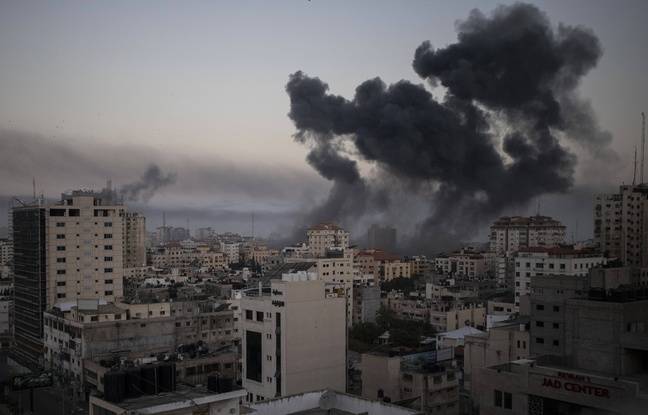 The deadly conflict between Israel and Hamas continues Thursday with Israeli strikes on the Gaza Strip and rocket fire from the Islamist movement towards the Hebrew state, also facing another “front” with riots in Judeo towns -arabs. Following multiple bursts of rockets into Israeli territory for four days, all flights to Ben-Gurion International Airport in Tel Aviv have been rerouted until further notice, airport authorities said.

The lynching of an Arab man near Tel Aviv

Far-right activists demonstrated across the country on Wednesday, sparking clashes with law enforcement, and sometimes Israeli Arabs. Police said “are responding to violent incidents in several cities, including Lod, Acre and Haifa.” And the country accused the shock of the broadcast, live on television, of the lynching of a man on the night of Wednesday to Thursday, considered Arab by his attackers, near Tel Aviv. These unbearable images show a man forced out of his car and then beaten up by a crowd of several dozen people, until he lost consciousness.

The Islamist movement announced on Wednesday the death of the head of its military branch for Gaza City, the main one in the Palestinian territory, while the Israeli internal intelligence services announced the death of several other tenors of the organization. The Israeli air force pulverized a tower of more than ten stories housing the offices of the Palestinian channel Al-Aqsa, created a few years ago by Hamas. The latest report shows 67 dead in Gaza, including 17 children, and nearly 400 injured.

About 100 rockets launched at Israel

“In retaliation for the raid on Al-Shorouk tower and the death of a group of leaders,” Hamas launched on Wednesday evening more than a hundred rockets towards Israel, several of which were intercepted by the anti-missile shield “Dome of Iron “. These new strikes have increased to around 1,500 the number of rockets fired at the Jewish state since the beginning of the week by various armed groups. And the death toll rose to seven dead on the Israeli side, including a six-year-old Ido Avigal, and hundreds of injured in just over two days.

Faced with the intensification of the fighting, a third emergency meeting of the UN Security Council, public this time, is expected on Friday. Washington announced the dispatch of an envoy to Israel and the Palestinian Territories to once again urge “de-escalation”, while Moscow called for an emergency meeting of the Quartet on the Middle East (EU, Russia , USA, UN). But Israeli Prime Minister Benjamin Netanyahu, who spoke to US President Joe Biden by phone in the evening, said he wanted to “continue” to strike and weaken Hamas’ “military capabilities”.

Towards a “large-scale war”

Palestinian President Mahmoud Abbas – who sits in the West Bank, the scene of protests, clashes and attacks against Israeli forces that killed three people on Tuesday – spoke to US foreign minister Antony Blinken, but to ask him to “stop the Israeli attacks”. For his part, Mr. Blinken said in a tweet that he had told him “the need to put an end to the rocket attacks and to lower tensions”.

Israel and Hamas are heading for “full scale war”, warned UN Middle East envoy Tor Wennesland: “A war in Gaza would be devastating and ordinary people would pay the price. », In this Palestinian territory plagued by an unemployment rate of around 50%.

Behind the scenes, the UN, Qatar and Egypt are working to facilitate mediation, the Egyptian foreign minister having contacted his Israeli counterpart in an unsuccessful attempt to convince him to stop the strikes.