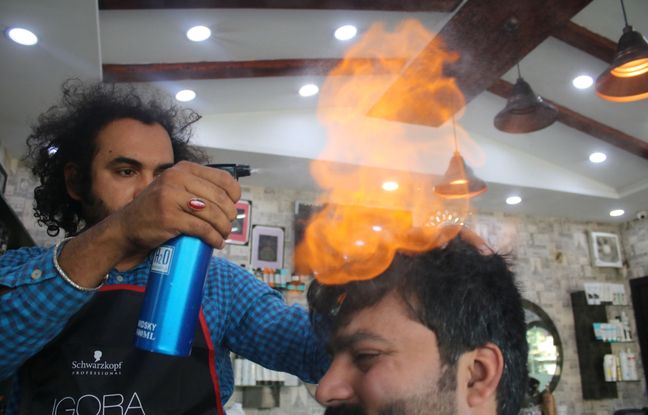 If you are ready to risk your life for a new haircut, your dream hair salon is in Lahore (Pakistan). There, Ali Abbas combs his clients with a blowtorch, a chopper or broken glass.

In a very conservative country in terms of fashion, the astonishing style of this hairdresser is however a resounding success. Some customers come from as far away as Germany to have their hair cut with a chopper or to gain volume by having their mane burned with a blowtorch.

VIDEO: Hoping to prove a cut above the competition, Pakistani barber Ali Abbas relies on an unusual array of tools to practice his craft — including blowtorches, meat cleavers, and even broken glass pic.twitter.com/5vUXJndvmv

A higher price for a “classic” cut

“I told myself that something different had to be done to attract more clients,” says Ali Abbas, who started this original activity in 2016. “At the beginning, I tried on artificial hair, then after m ‘being trained for awhile I tried on a client and he liked it very much. “

Since then, the Pakistani has managed to convince other customers. Its reputation extended far beyond Lahore. He has appeared on TV shows and participated in fashion photo shoots. Today he charges 2,000 rupees (22 euros) for one of those wacky cuts and 1,000 more rupees for a classic chisel cut.

The salon caters to a large clientele of women, who have to pay 500 rupees more for more stylish cuts. “I had my hair cut three times in this salon,” one of them confides. “I prefer if it’s done with a chopper, because my hair grows quickly afterwards. “