Thousands of participants in the Budapest Pride March 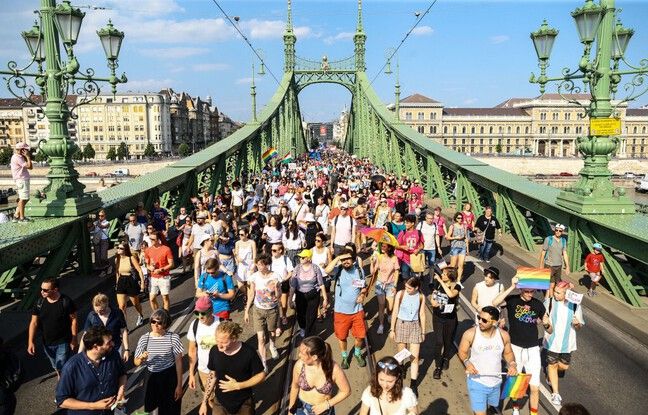 Several thousand Hungarians marched in Budapest on Saturday for the pride march, while Prime Minister Viktor Orban announced that a referendum would be held soon on a law banning the promotion of homosexuality for minors, denounced by the European Union. “Many people are appalled by the new law and the anti-gay propaganda. They want to show their support for the LGBT community, ”said Johanna Majercsik, spokesperson for the organizers of the Budapest Pride March.

According to her, the march gathered more participants on Saturday than in its previous editions. An AFP photographer found that thousands of people took part in the colorful parade, which walked a boulevard before crossing the Danube and reaching a park. The European Commission has launched an infringement procedure against Budapest after the adoption on June 15 of a law which notably prohibits the evocation of homosexuality and sex reassignment among minors.

“I’ve never been to a pride march before, although I’ve always supported LGBT people and understood their issues,” Zsofi Varadi, 46, told the crowd before donning a T-shirt with rainbow colors. “But this year I’m really angry because there is such propaganda” aimed at the LGBT community, that she needs “to see many people supporting her,” added the mother of two.

Rainbow-colored flags hung on balconies of buildings on the way to the march, while signs held up by participants caricatured Viktor Orban and the ruling Fidesz party. On Wednesday, Viktor Orban announced the holding, on a still unspecified date, of a referendum aimed at garnering voters’ support for this law. Some 200 counter-demonstrators deployed along the procession and separated from the participants in the Pride march by a police cordon brandished placards proclaiming “Stop LGBT pedophilia” and uttered homophobic insults.

“The anti-pedophilia law has given patriots like us weapons to protect our children from deviants like them”, proclaimed in a megaphone a speaker in front of the counter-demonstrators. Several dozen Budapest-based ambassadors attended the parade, after more than 40 foreign embassies and cultural institutes released a joint statement in support of LGBT rights this week.

A nasal vaccine against Covid-19 soon available thanks to starch nanoparticles?