Thousands of protesters in Vienna against health restrictions 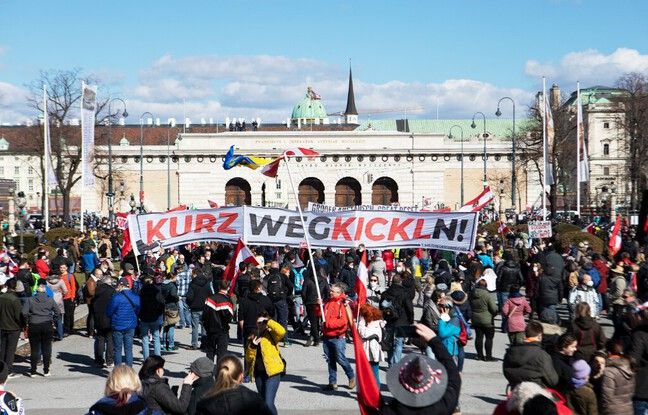 Several thousand demonstrators once again marched through central Vienna on Saturday to protest restrictions intended to stem the Covid-19 epidemic. The police announced that they had made a few arrests, some at the end of the demonstration when some people refused to disperse. Isolated clashes were reported between protesters and leftist counter-protesters.

Most of the participants did not wear masks and did not observe a physical distance as they crossed the city center towards Prater Park where the far-right FPÖ party had called them to gather. The last confinement in Austria was eased in February with the opening of schools, shops and museums. But the protesters are rising against the measures still in force such as the closure of restaurants and cafes and compulsory tests for students physically present in their schools.

“When the measures that are taken result in putting nearly a million people out of work or on leave, it destroys people economically, which will obviously have long-term consequences for families and for children. who live there, ”denounced a protester, Christopher Pollack. Former FPÖ Interior Minister Herbert Kickl, in a speech to the crowd, accused the government of pursuing a “crazy and bizarre” policy.

Demonstrators chanted slogans and brandished placards demanding the resignation of center-right chancellor Sebastian Kurz, or hostile to the media, described as “false press”. Members of the far right, including neo-Nazis, who had participated in previous protests against masks and restrictions, were once again present, according to Austrian media.

Demonstrations against the restrictions and their economic impact have increased in recent months in the country. The government has not ruled out further easing of measures on condition that the number of infections drops. But new infections reported every day have increased in recent weeks. More than 2,500 new cases were recorded on Saturday. According to Health Minister Rudolf Anschober, the particularly contagious British variant is now dominant in Austria.