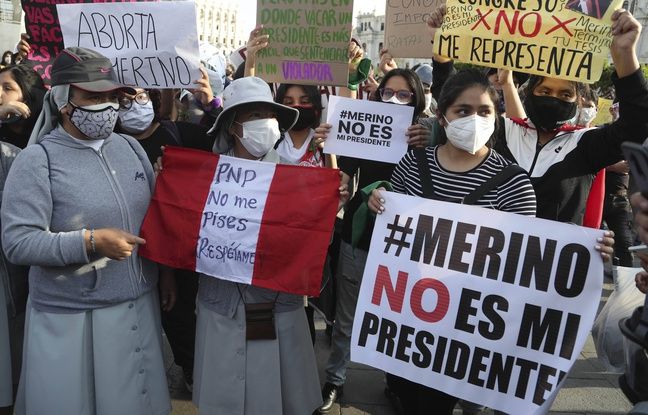 The political crisis escalates in Peru. At least three people were killed on Saturday in Lima on another day of protests, suppressed by the police, against Manuel Merino’s accession to the presidency.

Dropped by members of his party

The death of a 25-year-old protester was announced by civil servant Alberto Huerta, from the Office of the Ombudsman, a public body responsible for ensuring respect for human rights in Peru. His body had arrived at Almenara hospital, he said, adding that “the victim had lead wounds on the face and scalp, according to the doctor”. The Ombudsman added that 13 demonstrators were injured, and he denounced the indiscriminate use of force by the police. A little later, the Archbishop of Lima, Carlos Castillo, condemned the police repression by announcing on public television that he had just learned that there was “a third death”.

The Peruvian Parliament voted on Monday to dismiss President Vizcarra for “moral incapacity”, the head of state being accused of having received bribes while he was governor in 2014. His ouster and the The assumption of the presidency by Manuel Merino, a 59-year-old center-right agricultural engineer until then as head of parliament, has since Tuesday led to protests in Lima and other cities.

On Saturday, thousands of demonstrators, mostly young people under the age of 25, took to the streets again in various cities to reject what they see as a parliamentary coup. The biggest march brought together thousands of people in Lima. The police again used tear gas, including from helicopters, to disperse demonstrators who threatened to march on the seat of Parliament.

The Prime Minister does not give anything

Seven of Manuel Merino’s 18 ministers announced their resignation on Saturday night after the police crackdown, including that of Health, Abel Salinas, according to local media. However, Prime Minister Antero Flores Araoz, a 78-year-old conservative, had earlier ruled out that the president would step down under pressure from the protests: “He did not consider stepping aside, because millions of Peruvians support him. Unfortunately, they stay at home. I wouldn’t invite them out ”.