Three police officers charged with asphyxiating death of an African-American 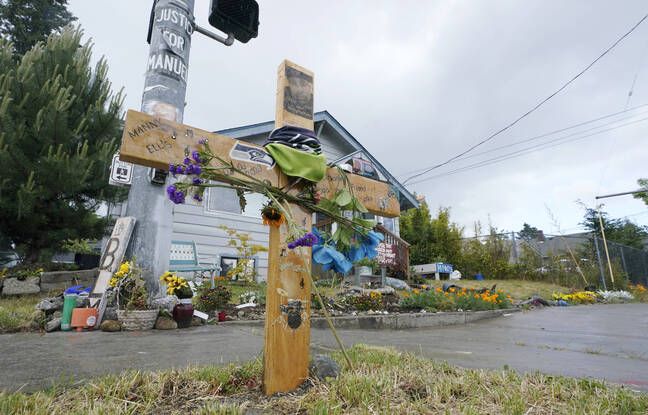 Like George Floyd, the victim begged “I can’t breathe”. Authorities in the US state of Washington announced on Thursday the indictment of three police officers for the death by asphyxiation of a black man in March 2020. Christopher Burbank and Matthew Collins, police officers in Tacoma, a city about 50 km from Seattle, are charged with murder, and their colleague Timothy Rankine with manslaughter, said the attorney general of this state in the northwest of the United States, Bob Ferguson.

Arrest warrants were thus issued against the three men, who face life imprisonment, said the elected Democrat, to whom the case had been entrusted.

The police “carried out a strangulation hold”

On March 3, 2020, the first two police officers wanted to arrest Manuel Ellis, a 33-year-old African-American who was walking home after buying donuts in a grocery store. They had assured that the thirty-something had attacked them. But videos and witnesses have undermined their version of the facts, according to the prosecutor’s office.

These former soldiers “pinned Ellis to the ground, hit him several times, made a strangulation and shot him three times with their electric pistol, without justification”, they write in a statement of their grievances . Their colleague, who arrived shortly afterwards with other reinforcements, “kept Ellis face down and continued to put pressure on his back although he said he could not breathe,” they add. According to the images of the scene, at no time does the victim seem to be exerting any resistance.

George Floyd’s death as a trigger

The death of George Floyd below the knee of a white Minneapolis police officer on May 25 had drawn attention to the case. The name of Manuel Ellis had become customary in the major demonstrations against police violence in the summer. In this context, the governor of the State of Washington, Jay Inslee, had relieved the sheriff and the local prosecutor of the investigation, evoking a “conflict of interest”.

Traditionally, prosecutions of American police officers have been very rare, not least because of their links to local prosecutors, and convictions even more. In April, however, a jury found police officer Derek Chauvin guilty of murder, who knelt on top of George Floyd for nearly ten minutes.