Three protesters in critical condition after being injured by live ammunition 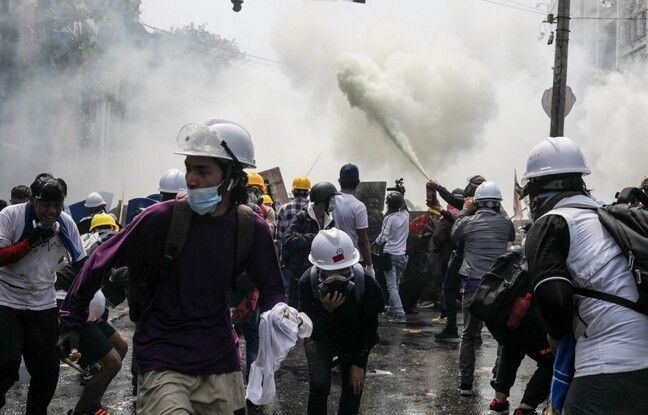 Repression continues in Burma, where the army has seized power. Three demonstrators are in critical condition on Tuesday after being injured by live ammunition from the authorities, which also target journalists.

“About twenty people were injured” in the town of Kale (North West) by the police and the army who came to disperse a pro-democracy rally, said a rescuer. “Three, hit by live ammunition, must be operated on urgently and are in critical condition,” said a doctor from the hospital where they were transported.

Protesters fewer for fear of reprisals

Hours earlier, a Burmese journalist, Kaung Myat Hlaing, was arrested at his home during a heavy-handed operation by the security forces, according to his employer Democratic Voice of Burma (DVB). Shots were heard during the arrest which he himself filmed live and whose images were broadcast on social networks. These new tensions come two days after a day of deadly repression in which at least 18 people were killed, according to the UN. For fear of reprisals, the demonstrators were less numerous on Tuesday to take to the streets, especially in Rangoon, the economic capital. Some still erected makeshift barricades with tires, wooden panels and metal bars to protect themselves.

In front of them, the security forces were deployed in numbers. In the district of Sanchaung, in the north of the city, “they fired tear gas and rubber ammunition”, reported a resident. “They come here to clean up the neighborhood,” said another. The waves of arrests continue. 1,300 people were arrested on Sunday alone, according to state television channel MRTV. And journalists find it increasingly difficult to be able to work. Several have been arrested in recent days, including a photographer from the American news agency Associated Press. Others were targeted by rubber bullets, including two employees of the Chinese agency Xinhua.

“No forgiveness for you until the end of the world”

Internet cuts, waves of arrests, shootings, strengthening of the repressive arsenal: the junta has continued to increase its repression since the putsch of February 1 which overthrew the civilian government of Aung San Suu Kyi. Held incommunicado since her arrest, the 75-year-old ex-leader is now indicted on four counts: illegal import of walkie-talkies, failure to comply with coronavirus restrictions, violation of a telecommunications law and incitement to unrest public. She appeared “in good health” during a videoconference hearing on Monday, according to her lawyer who has still not been allowed to meet with her client.

After nearly a month of pro-democracy mobilization with daily demonstrations and a campaign of civil disobedience, the authorities’ response was particularly bloody on Sunday. On Tuesday, hundreds of people gathered in a small Yangon cemetery for the funeral of one of the victims, Nyi Nyi Aung Htet Naing, who was shot in the stomach. “There is no forgiveness for you until the end of the world,” sang the crowd, gathered in front of the coffin covered with flowers of this student who died at 23 years old. A few hours before his death, Nyi Nyi Aung Htet Naing had posted a last message on social networks: “How many corpses does the UN need to act? “.

An “internal affair” for China and Russia

The deadly violence sparked a concert of international condemnations. Burmese Ambassador to the United Nations Kyaw Moe Tun himself made a dramatic break with the putschist generals last week by calling for “an end to the coup”. He was removed from his post by the junta. But Beijing and Moscow, traditional allies of the Burmese army, consider this crisis to be an “internal affair” in the country. New international talks must take place. The fifteen members of the UN Security Council, including China, plan to hold another meeting on Burma this week, diplomatic sources said. Asean (Association of Southeast Asian Nations) foreign ministers are due to meet online this Tuesday.

There have been around thirty dead in the ranks of the demonstrators since February 1, according to an NGO, the Association for the Assistance of Political Prisoners (AAPP). The junta claims for its part that a police officer perished while trying to disperse a rally. The last popular uprisings of 1988 and 2007 were bloodily suppressed by the army already in power for nearly 50 years since the country’s independence in 1948. The army, which contests the result of the massively won November elections by Aung San Suu Kyi’s party, promised to hold a new ballot.