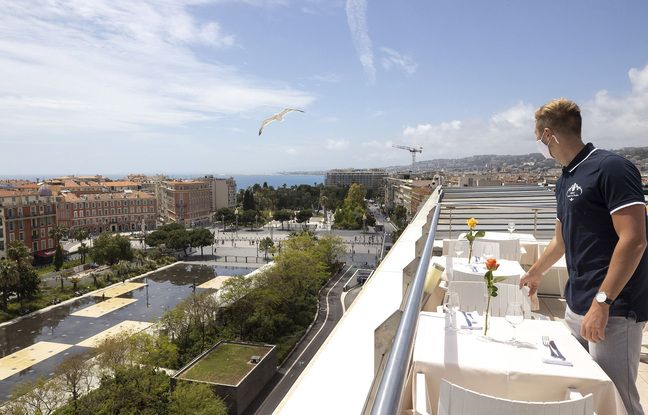 The sun, the terraces, there is a taste of summer on the Côte d’Azur. All that’s missing is the tourists. The locals are taking advantage but the professionals in the sector are impatient. “With the health crisis, the trend is to discover heritage located nearby, analyzes the Nice Côte d’Azur Metropolitan Tourist Office. It is good for some establishments but not for accommodation ”.

Especially since the territory usually attracts a lot of foreign tourists. “The DNA of the Côte d’Azur is 60% international in season,” indicates Christine Welter, president of the union of hotels in Cannes and the Cannes basin. Last year it was an 80% indoor market. For this season, we imagine a copy and paste for the customers. “

According to her, reservations go hand in hand with government announcements. “There will be a release from June 9. We hope for an increase in bookings at that time. And then, the hotel industry is part of a tourist ecosystem, we live with restaurants and cultural life. Our season will really start at the time of the Film Festival, postponed to July this year for a collector’s edition. “

“The desire and the budget are there”

For the summer of 2021, as for the previous one, it will then be necessary to count on the French customers. On the tourist rental side too, the tendency is rather to “wait-and-see” according to Lucienne Giulian, president of the Union of tourism rental professionals (UPLT). “We have gained two or three weeks of reservations compared to last year, but the game is not yet won. We especially prepare to manage last minute reservations. People are just waiting for a green light because they want and the budget. We feel that they want to go on vacation to the Coast, the market is there. “

The same goes for the Tourist Office. “People are waiting to learn more about health. Last year, we did not have this problem because no one was considering the subsequent re-containment. The current situation means that everyone has in mind that a new wave should not start again. So we are still going blind, it starts slowly. There is a lot of consultation on the Internet. It shudders but there is no concretization while being very variable according to the establishments ”.

“A better season but above all longer”

Where it is concrete is at the Hotel Aston La Scala. “When the deconfinement schedule was announced, we recorded 1,000 reservations in one week, 400 for May, 400 for June and 200 for July,” says Eric Trolliard, general manager of the hotel. And this, despite an increase in our prices. In May, we had an occupancy rate of 40% but if there had been catering from the beginning of the month, we could easily have had 80% ”.

The general manager is confident but remains in expectation, like his clients. “We all expect the same thing, to see how things will evolve. In the meantime, there is no cancellation yet, perhaps only an obstacle to the reservation ”.

For the president of the Cannes hoteliers union, “it’s not about doing a sprint like last year. There you have to do a marathon. The idea is to hold on. Whatever happens, we hope for a better season than in 2020, but above all longer ”.