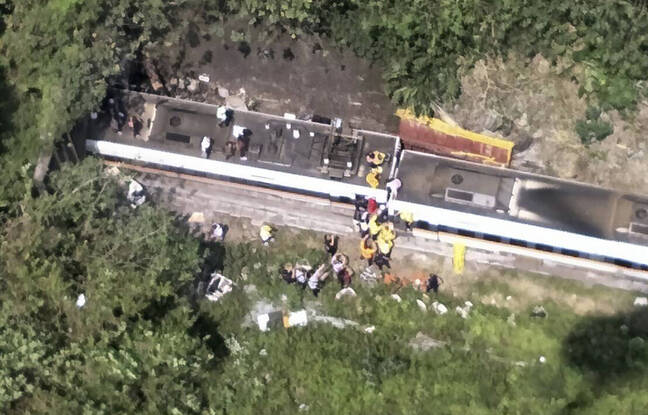 Dozens of people are believed to have died in the derailment of a crowded train inside a tunnel east of Taiwan on Friday. President Tsai Ing-wen’s office said the head of state has ordered hospitals to prepare to receive large numbers of victims. “The top priority now is to rescue those stranded,” his office said in a statement.

Police reported 36 passengers in “cardiac arrest before arriving at hospital” – a term used to refer to a person showing no signs of life. In addition, 72 people were stuck in the wagons and 61 were taken to hospital. According to the Center in charge of emergency operations, the toll would be less heavy, with 26 people showing “no sign of life”.

UDN, a team of which was on site outside the tunnel, showed footage of at least two undamaged cars and rescuers helping passengers out. “I had the impression that there was a sudden and violent shock and I fell to the ground”, testified a woman on the channel.

The train, which carried some 350 passengers and consisted of eight cars, linked Taipei to the town of Taitung, located in the southeast of the island. The accident happened on Taiwan’s eastern rail line at around 9:30 a.m. (1:30 a.m. GMT) near the coastal city of Hualien.

Media reports said the accident was caused by a construction machine slipping off an embankment before hitting the train entering the tunnel. Photos taken on site show the back of a yellow flatbed truck lying on its side, near the train.

The accident happened on the first day of the annual Tomb Sweeping Festival, a long public holiday weekend in which Taiwan’s roads and railways are usually crowded. During this period, the inhabitants generally return to their native village to clean the graves of their loved ones and to make offerings.