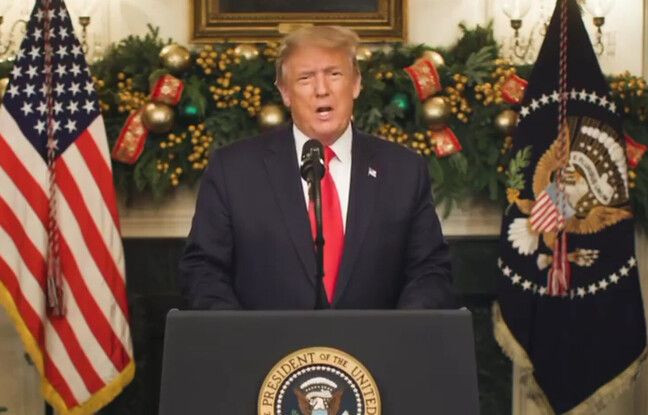 Money for foreign countries and only $ 600 per American is a “shame”, according to Donald Trump. The US president on Tuesday evening rejected the $ 900 billion stimulus package adopted by Congress the day before after months of blockage, calling for an increase in the amount of checks sent to families.

“I am asking Congress to amend this bill and increase the ridiculously low $ 600 to $ 2,000 or $ 4,000 for a couple. I also ask Congress to get rid of unnecessary and costly elements of this law, ”he demanded in a video posted on Twitter.

Statement by Donald J. Trump, The President of the United States

Deemed essential to get the world’s largest economy back on track, the plan adopted by American parliamentarians on Monday evening to support households and businesses affected by the Covid-19 pandemic cannot come into force without the president’s signature. However, the latter suggests in the video that he is not ready to initial it without the requested changes. In absolute terms, he can play time without trying to veto – the text was adopted almost unanimously, which would allow Congress to override a presidential veto.

House Democrat Leader Nancy Pelosi said she was in favor of granting $ 2,000 per person. She recalled that the House had already voted in this direction nine months ago, and that the Senate, controlled by the Republicans, had opposed it.

Me and @AOC have the amendment ready. Send the bill back, and we will put in the $2,000 we’ve been fighting for that your party has been blocking. pic.twitter.com/GGXtJt77D9

The Republican billionaire asks that a “suitable” amended bill be sent to him, otherwise it could be up to “the next administration” to adopt a stimulus plan. “It’s really a shame,” he said, while the White House was involved in negotiations on the text through Treasury Secretary Steven Mnuchin.

“It is called the Covid Aid Law but it has almost nothing to do with the Covid”, added the president, citing in a jumble the aid contained in the text for Cambodia or Burma and the funding intended to the Egyptian army when the latter, he said, “will go and buy almost exclusively Russian military equipment”.

He also regrets that the text provides for millions of dollars to promote “democracy and gender programs” in Pakistan, or for cultural institutions in the United States.

Biden will ask for another plan

It was Sunday, after months of blockade, that Democrats and Republicans announced that they had reached an agreement in principle on measures including in particular checks to the most vulnerable families, aid to small businesses and schools, additional unemployment benefits $ 300 per week or an envelope for the equitable distribution of vaccines against Covid-19.

The first plan, for a gigantic amount of 2,200 billion dollars, had been voted urgently at the end of March, during the first wave of the pandemic. It included exceptional unemployment benefits of $ 600 per week and the sending of checks for $ 1,200 per adult.

The President-elect of the United States, Joe Biden, meanwhile estimated on Tuesday that the $ 900 billion aid plan was “a first step” but that it would not be enough, and announced that he would ask for the next year in Congress to vote a new plan to support the US economy.

“We have to work by involving both parties (Republican and Democrat). This is the only way we will get by, ”added the one who is a regular on the aisles of power in Washington after more than 35 years on the benches of the Senate and eight years as vice-president.