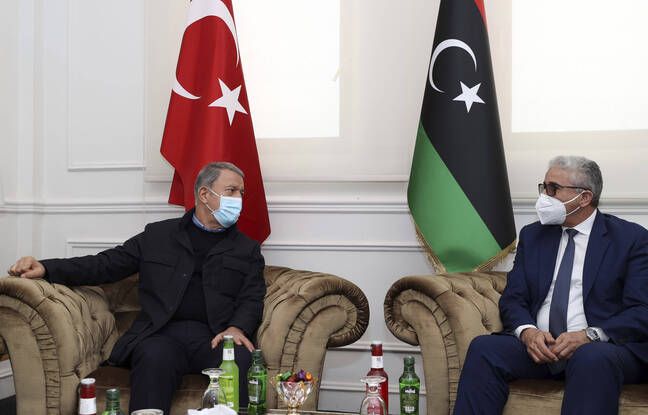 Turkey will respond to any attack by the strongman of eastern Libya, Marshal Khalifa Haftar, against his forces in the warring country, Turkish Defense Minister Hulusi Akar said in a statement. visit to Tripoli.

“The war criminal, the murderer that is Haftar and his forces must know that they will be considered as legitimate targets in the event of an attack on the Turkish forces” who support the Government of National Unity (GNA) in the conflict in Libya, the minister said late on Saturday, two days after the Marshal’s bellicose statements against Ankara.

“If they take this step, they will not be able to find any place to flee (…) everyone should come to their senses,” he added at a press conference. Turkish military support allowed pro-GNA forces to repel and defeat in June 2020 a pro-Haftar offensive launched in April 2019 to seize the Libyan capital Tripoli. The GNA, based in Tripoli and recognized by the UN, controls from the whole of the northwest of the country.

This Thursday, Khalifa Haftar called for “driving out the Turkish occupier”. There will be “no peace in the presence of a colonizer on our lands”, said the Libyan marshal supported him by Russia and the United Arab Emirates. On the same day and on the occasion of the 69th anniversary of the country’s independence, the leader of the GNA, Fayez al-Sarraj, called on his compatriots to “turn the page of disagreements to achieve stability”.

In search of a political solution rather than a warrior one

Despite the multitude of series of interlibyan talks to get the country out of the crisis, made possible by a ceasefire signed in October under the auspices of the UN and generally respected, bellicose declarations are increasing. On the first day of his visit to Tripoli on Saturday, the Turkish minister discussed with Libyan officials how to respond to a possible new offensive by Haftar, according to a statement from the High Council of State (HCE, pro-GNA).

“What matters is that everyone contributes to a political solution. Any other action can only be bad, ”he said on Saturday evening. The Turkish parliament on Tuesday adopted a motion extending for 18 months the authorization to deploy “soldiers” in Libya, a country plunged into chaos since the fall of Muammar Gadhafi’s regime in 2011.