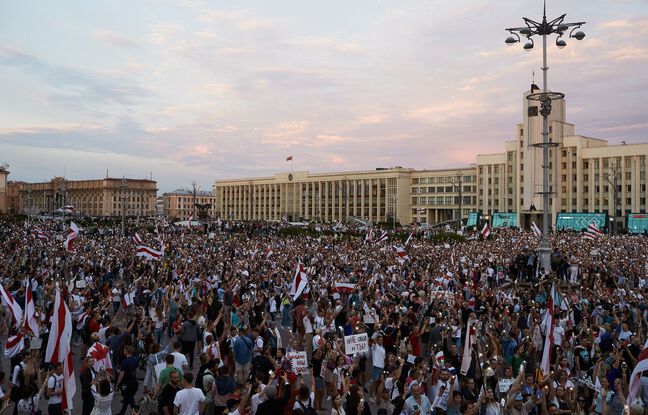 Two Belarusian journalists were sentenced on Wednesday to two years in prison for having participated by their coverage in the protest movement of 2020 in Belarus, reported the Belsat channel, their employer.

Correspondents of this Polish-based opposition channel, Daria Tchoultsova and Katerina Bakhvalova were arrested by riot police on November 15 in an apartment from where they had just filmed the violent dispersion of a demonstration in tribute to a opposition activist, Roman Bodarenko, killed a few days earlier.

“I showed these events on the air, and I was thrown in prison for that, by fabricating accusations”, Katerina Bakhvalova said Wednesday evening, in her last speech before the court withdrew to deliberate. The prosecution accused the two reporters of having incited the population to demonstrate illegally by their reporting, which “seriously undermined public order”.

The two women, 23 and 27, had pleaded not guilty, considering themselves victims of the repression that hit the vast protest movement that erupted after the re-election of Alexander Lukashenko in August 2020, a ballot peppered with accusations of fraud massive.

Belarusian President Alexander Lukashenko has faced unprecedented protests for months. The authorities cracked down on the movement, largely silencing it with arrests, also marked by police violence. All opposition figures are imprisoned or in exile and thousands of demonstrators have been arrested. Many media have also suffered repression.

The Belarusian authorities carried out new searches on Tuesday that targeted around twenty journalists, association activists and union officials, as part of an investigation into the protest movement of 2020. Supported by Moscow, Alexander Lukashenko refuses for his leaves power and promised only vague constitutional reforms to try to calm the protest.