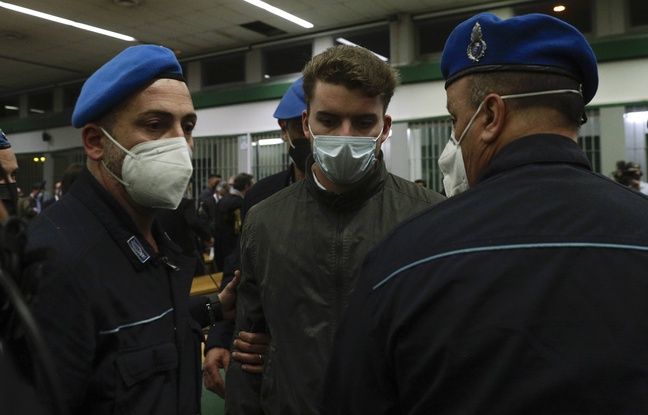 Two young Americans were sentenced Wednesday to life imprisonment by a court in Rome for the murder of a rifleman in July 2019. Finnegan Lee Elder and Gabriel Natale-Hjorth, aged 19 and 18 at the time of the facts, were found guilty of stabbing Mario Cerciello Rega, 35, during an intervention with one of his colleagues.

Finnegan Lee Elder, who admitted to stabbing the victim eleven times, said he and Gabriel Natale-Hjorth had been attacked by men they thought were drug traffickers.

“We presented ourselves in front of them (…) as riflemen”

According to elements gathered during the investigation, the two Americans were on vacation in Italy. They had seized the bag of the intermediary of a dealer who had sold them aspirin for cocaine and demanded 100 euros to return it to him. But the latter, an indicator, had warned the police and it was the carabinieri who had gone to the meeting fixed for the exchange.

The defendants, from San Francisco, California, claimed that the two riflemen, who were in civilian clothes and were unarmed, did not identify themselves as such. The colleague of the killed rifleman, Andrea Varriale, rejected this version. “We presented ourselves before them (…) as riflemen,” he testified.

Photos of the accused are controversial

Even though Mario Cerciello was stabbed by Finnegan Lee Elder, Gabriel Natale-Hjorth is on his side because, under Italian law, anyone indirectly involved in a murder can be charged with murder. Occurring in the middle of the summer of 2019, this murder had aroused strong emotion in Italy and a surge of sympathy for the young carabinieri, who had just returned from his honeymoon.

But the defense also highlighted conflicting statements and breaches in the investigation, including a falsified report and the false testimony of Carabinieri Varriale who had claimed to be armed at the time of the intervention. The case had also sparked controversy following the release of photos of Gabriel Natale-Hjorth on which he was seen blindfolded and hands tied behind his back at a police station after his arrest.